On Time and the Garden 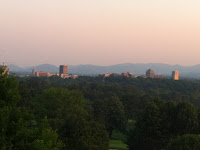 Asheville skyline and Blue Ridge Mountains
I've had a whirlwind summer thus far, and it's gone by too fast (especially since there's still so much more work to do . . .). I've tried to research and write, and taken on many (too many) side projects (as my last post mentioned). I've been planning a brand-new ESOL course, which I'll teach in the fall and spring. I had a beautiful road trip to Asheville, North Carolina to help my friend Ali move, and enjoyed spending time there with close friends and exploring both the city itself and the surrounding Blue Ridge Mountains. I also attended my first New Chaucer Society conference in Portland, Oregon. I found the conference to be, as the best conferences always are, equal parts invigorating and exhausting. All of the panels I attended were excellent and the discussion lively. My own panel went really well. I got great questions, and I felt that all of the papers worked together beautifully to bring out new ideas. I was also lucky enough to be presenting on the same panel with my friend Sharon, who gave her first conference paper, which was excellent. I was reminded once again of how lucky I am to be in a field with such intelligent, warm, lively people.They're people who pose interesting questions and allow for productive dialogue. 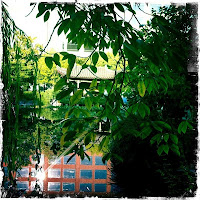 Portland Chinese Gardens
(Where the reflections are more real than the buildings.)
This conference is set up particularly well for graduate students, with generous financial assistance, a full-day graduate seminar, and a generally welcoming environment in which all are made to feel part of the community. I met some new people and spent time with old friends; I saw many wonderful papers and a really outstanding plenary lecture by Carolyn Dinshaw. Dinshaw spoke eloquently about history and temporality and Mandeville's Travels. I also got to explore Portland a bit and to visit some delightful family members whom I don't see often enough. 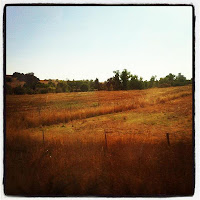 Countryside outside my hometown
(Where I've had some new adventures this trip)
Now, after two years away, I am home for a visit to Northern California. The last time I was home, I was here for the birth of my friend Dominique's son. This time I made it to that son's second birthday party. The differences between the newborn baby and two-year-old make concrete for me the temporal distance between my last visit and this one. I am staying with my grandmother in my childhood home, a place filled with memories of the times I had there and the people I've loved who used to live there and who live there still. I still expect to discover my grandfather dozing in a chair when I walk into a new room. I still expect to hear my father's voice calling for me from the next room to come and see something he's discovered in the newspaper or in a book or online. I am aware of the way in which the space I'm in exists relatively unchanged, and only time separates me from previous moments in the same locations. I'm particularly struck by the garden, much grander than it was when I was a child. I spent so many happy hours in that yard, swinging on my swing set or having adventures or pretending to be in a fairy land. 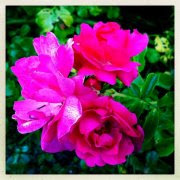 Roses from our garden
My grandpa spent many hours in the yard as well, working in his treasured rose garden and planting new varieties of tomato. Three activities my grandfather loved above all: photography, hiking, and gardening. I would swing and he would garden and we would need no words to express our contentment. I see traces of him everywhere in this garden. Flowers that he planted still bloom each year, their colors bursting forth from the past into the present. My dad loved the garden, too, and had information and opinions on every plant. When we had landscaping done some years back, my father would bake treats and make snacks and bring them out to the gardeners and just talk to them for hours. When I stand in the garden now, I feel comforted in knowing that a space they both loved so much is still thriving. 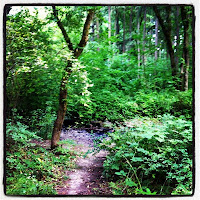 Park outside of Portland
I was primed by the NCS conference to think about time and the garden. There was so much discussion at the conference of time, history, and space (as with the plenary I mentioned above), of ecologies, of objects. (There was also a whole thread on oceans! I presented on a panel in this thread, and saw some other incredible oceans panels as well.) One of the conference receptions was held in the beautiful Chinese Gardens, a lush location which fostered much happy mingling between scholars young and old (aided by a generous sprinkling of champagne). I had also gone for a walk outside of Portland with my cousins Susan and John, who had explained to me that the topography we saw (verdant trees and brooks) would have covered downtown Portland, a fairly new city, only about a hundred years ago. Trees have been cleared away to make room for streets and buildings, but wild greenery still makes its presence known around the margins of the city. We walked from this landscape past the mowed lawns of suburban Portland, and I noticed the similarities and differences of these landscapes. I also visited the Buffalo Botanical Gardens earlier this summer, a Victorian greenhouse wonderland filled with spaces that seem wild (carnivorous plants lurk in one spot, koi fish swim playfully in another), and yet in which everything is contained and categorized. The rooms are carefully themed and the enclosed nature of the space allows for a great deal of control. With all these experiences this summer, both recreational and professional, I was uniquely prepared to think about urban spaces and greenery as I returned to my childhood home. 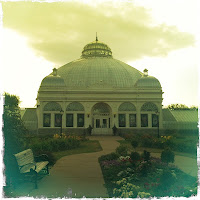 Buffalo Botanical Gardens
Gardens are complex spaces; they're natural and yet cultivated. My grandmother talks brightly to me of one plant that has been carefully chosen and another, right next to the first, which, as she puts it, "the birds brought to us -- a delightful surprise." No matter how deliberately a garden is maintained or controlled (I'm looking at you, topiary), the natural world will make its mark. Animals and weather patterns, for example, cannot be easily regulated. So the garden is both natural and manmade. Gardens are popular spots in medieval literature because of their liminal existence in a variety of categories. They blur the line between public and private, outside and inside. Medieval dream vision poems most often begin in gardens, complicating the distinction between awake and asleep, reality and dreaming. I am reading Bachelard's book on The Poetics of Space right now, and he praises the house for enabling us to dream. In medieval literature, it is often the garden that facilitates dreaming (though Chaucer sometimes writes about falling asleep in bed while reading a good book, a practice all too familiar to me). 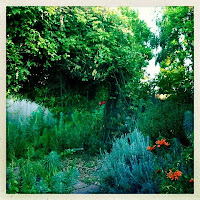 Can you spot the swing?
There's also a real way in which the garden we have now is the garden of my family's dreams. Much planning and discussion and work and love went into the garden, and everyone felt as if they were witnessing, as the plants grew and blossomed, their floral visions coming to vivid life. And, in some cases, exceeding imagination. Plants grow and change and interact in surprising ways. I walked into the backyard and was astonished at how plants have covered my old swing set. A tiny swing emerges from a tangle of leaves and flowers, barely visible from a distance. When I was young, it was the swing set which defined that backyard space for me. Its crisp lines divided the space and were easily visible from inside the house. Now, from inside, I could almost miss the swing if I didn't know it were there. I moved into this home when I was seven, and the swing set was there waiting for me. It is the same swing set that my dad and aunt and uncle played on before I was born. My grandpa put that swing set up in the yard in 1964 when they moved to this house, but it had been in the family before that, traveling with them from Oxnard to Santa Cruz to Sunnyvale before landing here in Petaluma. My grandparents first set up the swing set around 1950, before my father was born, so he played on it his whole childhood and then I did the same. The swing set always seemed to me a tangible object connecting me to my father's childhood. It connected me to past and future, ground and sky. If I swung high enough, I could see both our own yard and over the fence to the plum trees in the yard next door. There's a freedom for a child in swinging, but a contained freedom, a comfortable kind of freedom. Within the confines of our yard I could have adventures and know that an adult was right around the corner. The swing set always seemed a permanent fixture, rooted in the ground like a metal tree, a part of the yard more reliable than the fleeting petals that visited the garden in spring. The fact that the swing set had in fact been relocated multiple times, that it neither grew from the yard nor originated there, simply didn't fit with my conception of my childhood. 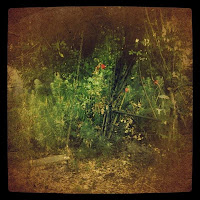 A new photo I made to look old
-- more playing with time
Flowers bloomed and wilted, but that swing set was always there, would always be there. Now, as the leaves and flowers cover and enclose the swing, I see that the swing set really has been taken into the garden. The overgrowth has made the set its own, has turned it into a kind of trellis, covered by plants but also holding them up in a kind of symbiosis of metal and paint and flower and leaf. Unlike the inside of the house, the garden really looks nothing like it did when I was little; changes happen and are made to happen. But if I look close enough I can see traces of my childhood, of my dad's childhood and my grandparents' adult life. The swing is still there, hidden amidst the leaves like a secret memory; the baby rosebush my grandpa planted for me in seventh grade (a rough year for me, as for many kids) still blooms amid newer plants. Layers of vegetation and layers of memory intertwine in that space which is both of the house and separate from it. Some of the same plants bloom, but their petals are new each year, highlighting the ways in which temporality and tangibility can be both very fragile and very real.
Posted by Kristi J. Castleberry at 7:10 PM