Musings on Trash and Treasure

As I mentioned in my last post, I had an absolutely amazing time at the NCS conference in Portland last month. I was very excited to be a part of the Animate Objects and Ecologies sessions helmed by Allan Mitchell, and I found myself both delighted and deeply relieved that my paper was as well-received as it was.  As always, I was gifted with an array of deeply helpful feedback before and after the actual presentation, and I came away from the experience both inspired and encouraged in my work.

I was especially excited by the energy in the question and answer portion of our session.  It really took the form of a lively conversation, which was pleasantly surprising in no small part because of the early start time and the fact that Thursday was the final day of the conference.  Initially, I had wondered how our papers would speak to one another. Siobhan Bly Calkin was set to present on the holy lance of Antioch, Laura Diener on medieval textiles, and I on Chaucerian images of books.  On the surface, the kinds of objects we planned to examine seemed to have little in common, but as the session progressed it became very clear that we were all speaking along uncannily convergent lines.  Each of us, in our own ways, addressed issues at the heart of the previous session devoted to animate objects.  In particular, we ended up posing and addressing questions similar to one that  Jeffrey Jerome Cohen and others raised the day previously: namely, what happens when objects don't behave the way that we expect or wish them to?

There were an array of wonderful questions and comments made throughout the remainder of our session that morning, but one in particular really got me thinking, and I promised Kristi that I would write a small post on it.  Laura, at one point in our conversation, asked how we humans wish to be remembered through the objects that we leave behind, which made me think immediately of two things: 1. My first job at a small archaeological firm in Williamsburg, Virginia, and 2. A wunderkammer (curiosity cabinet) by Mark Dion at the Tate Modern.

The first job that I ever had as a young person was at a place called Cultural Resources, Inc. It's a small archaeological firm located in Williamsburg, VA, and I was hired on to wash artifacts as they were brought in from various dig sites around the state. It sounded incredibly glamorous and Indiana Jones-ish at first, but the vast majority of time I washed bags of nails and clay pipe bowls.  I probably washed thousands of nails that summer. Bags upon bags of old, rusted nails. My days were filled with mud and weary iron. Finding a brightly colored pottery shard amidst the sea of nails and pipe bowls was a special occasion. I became deeply familiar with the contours, the shapes, and the smells of those broken things. The vast majority of what I touched in that job, I discovered, came from trash pits accidentally unearthed by contractors and builders around the state. Whenever they dug into such a trash pit, which would have been filled several centuries ago with items too broken for repair, all construction had to stop until an archaeological firm could come in and exhume these items —items that were once worthless but now had the opportunity to speak and, we hoped, say something about where they came from.

I do remember a particularly eventful couple of months the summer following where we actually handled a series of slave skeletons as they came to us from Fort A.P. Hill. The soldiers there had been digging foxholes for some sort of drill and accidentally unearthed an unmarked slave cemetery. Enter the crew from Cultural Resources who, much to the consternation of those on base, kept finding skeletons to exhume.  Under normal circumstances, the idea of touching and washing a human skull — let alone a skull with a massive root creeping into its mouth and out of a right eye socket — would probably have horrified me. I was so tired of nails and pipe bowls, however, that the obvious morbidity of the objects I had to handle didn't even occur to me. I was simply thrilled have something different to handle. Even when I had a child's skeleton completely disintegrate in my hands when I gently released it from its wrappings. Even when I had to spend eight hours a day under a constant stream of water, wood kebab stick and a toothbrush in hand, to delicately remove the mud from the top surface of the bones.  The only piece of the bone that is of value and can reveal intricate medical details about the person who it once belonged is that very top layer. Peel that away with the mud, and his or her story is lost. This stint with the skeletons, however, was but a punctuation in my career of artifact washing. The rest of the time was spent opening bags of trash-made-treasure, washing it so that experts could analyze it.

I found the work simultaneously mundane and fascinating.  To be sure, washing the same genus of artifact over and over again could get a bit dull. But even still, I would often find my mind wandering as I washed these broken pieces, marveling over the fact that we now placed so much value in them when they had been casually discarded centuries before. Looking back, I realize how deeply fortunate I was to have been able to work at this place for my very first job. How many other 15-year-olds get the chance to handle the past in such a way?

Fast-forward to the summer after my junior year in college.  It had been at least three years since my work at Cultural Resources.  I was over in London, spending some time exploring the city before beginning an abroad program in Bath.  I decided one day to explore the Tate Modern for the first time, and I encountered -- among other fascinating installations -- Mark Dion's "Tate Thames Dig" (1999). It was a huge, double-sided cabinet with an array of small drawers on either side.  Curiosity certainly got the better of me, and I decided to investigate. Upon pulling open a drawer, I nearly laughed out loud. There they were: rusted 17th or 18th century nails, pipe bowls arranged by shape and hue, and pottery shards.  I thought I'd escaped these things -- I'm sure I had dreams of nails and pipes during those summers -- and yet here they were, haunting me all the way over in England. I swung around to the other side and opened a few of the drawers there to see what they contained. One held an array of plastic bottle tops, arranged by color to create a rainbow of detritus. Another was full of doll legs and arms. My initial reading of this installation was that the one side contained 17th and 18th century trash items, and that the other contained modern refuse, forming a kind of commentary on the things that we value or devalue based on age, historical worth, etc. As it turns out, however, the organizational methods for this installation are more discursive. I recently learned that had I opened more of the drawers, I would have found an overlap of time periods.  Dion deliberately kept himself from imposing too strict of an order on the objects that he found along the Thames in order to allow viewers to form their own opinions about the objects he collected.  My encounter with this installation, then, was one of serendipitous selectivity, as the drawers I opened on either side formed discrete divides between the old and the new, artifact and litter, treasure and trash. 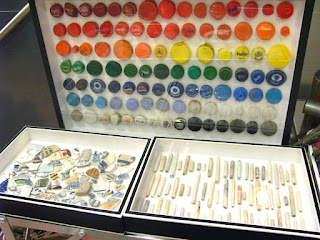 And now to fast-forward to the Animate Objects (Part the Second) session at NCS. I brought both of these anecdotes up in response to Laura’s question and proposed – through them –- a related but distinct query: do we, in the end, actually have any control over the objects we leave behind and how they will speak for us in the future? The answer that springs from the anecdotes above seems to be no.  I’m usually not in the business of making broad claims about humanity (because I typically have to convince undergraduate writers to do otherwise), but it seems to me that a great many of us want desperately to be remembered, to live on in the things (animate and inanimate, tangible and intangible) that we leave behind. Achilles, after all, was said to have chosen a brutal death in his youth so that he could enjoy that kind of eternal life.  However, if Achilles existed at all, I doubt he would have anticipated that his name is most often cited today not for his martial feats in the killing fields along the Scamander, but as the name of posterior leg tendon. He is remembered most for what killed him, that small part of flesh covered by the hand of an overly-protective goddess mother. I have little doubt that the Achilles we encounter in The Iliad would have chosen a different legacy for himself if given the opportunity. In like fashion, though we create so many beautiful things on this earth, the majority of what we leave behind, and what we risk being remembered by, is waste. A few hundred years from now, that is what archeologists will be digging up in abundance. To be sure, objects of special beauty and intricacy will have priority as they do today in places like Cultural Resources, but those objects come along so very rarely. More than likely, they will work (as we do today) with the fragmented detritus of an older time and try, as best they can, to riddle meanings out of it all.