My toddler has been madly in love with Disney's Robin Hood for some time now. So much so, in fact, that she starts dancing if my husband and I start humming or singing Alan-a-Dale's opening song. Needless to say, I've watched the cartoon more than few times over the past several months, and in the process, I noticed something rather interesting/peculiar about the way in which the Third Crusade is imagined and configured therein.

In the cartoon, Richard I is doing what he so often does in various iterations of the Robin Hood story: he's off fighting in the Holy Land, and his absence gives the wicked (but ultimately feckless) Prince John an opportunity to usurp the crown. We know this (albeit deeply fictive) part of the story from an early point in the narrative. However, the actual reason for his crusade is revealed in a conversation between Prince John and Sir Hiss while the two make their way to Nottingham:

The "real reason," then, for the Third Crusade -- as the film tells it -- is Sir Hiss's hypnotic powers, his ability to brainwash the King into waging holy war. I chatted about this scene with my friend and colleague Bronwen (who also has a toddler quite taken with the film) and she offered that this was a way, perhaps, to "excuse" the English king for waging a religious war that might have appeared vexed at best to contemporary audiences.

This theory seems to be confirmed by the way the film itself opens. The first shot is of a book that opens to the following text:

Long ago, good King Richard of England departed for the holy land on a great crusade. During his absence, Prince John his greedy and treacherous brother, usurped the crown. Robin Hood was the people's only hope. He robbed from the rich to feed the poor. He was beloved by all the people of England. Robin and his merry men hid in Sherwood Forest to... 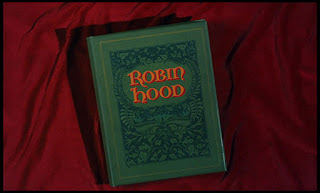 Alan-a-Dale takes over the narration at this point, however, and tells his audience that


there's been a heap of legends and tall tales... about Robin Hood. All different too. Well, we folks of the animal kingdom have our own version. It's the story of what really happened in Sherwood Forest. (emphasis mine)

In other words, Alan-a-Dale suggests here that the "book version" to which we're introduced, and in which he ambles about with his lute, is merely one of those "legends and tall tales." As a result, we're invited to question all other iterations of the story, and this invitation creates a space in which to place the aforementioned revelation about Richard's crusade. By implication, then, we're encouraged to understand that Richard's crusade, despite what that first page of the book might tell us, was hardly "great" at all.

However, a slight wrinkle in this theory presents itself in Little John's boisterous song far later in the film, where he sings of "bonny good King Richard lead[ing] the great crusade he's on." The good people of Nottingham and Sherwood forest, then, perceive the crusade to be virtuous, and clearly have no idea either here (or at the end when Richard returns to England) that the whole campaign was waged because the king was hypnotized. The king fighting a holy war, in other words, doesn't seem to vex our heroes in the slightest.

So what can we make of all of this? Admittedly, Robin Hood was a rather hastily-constructed cartoon, so I do have my doubts over the amount of time the writers spent laboring over this particular plot point. Nevertheless, the representation of crusading (or at least the motivations for it), struck me as compelling, because the contradictory and disjointed allusions to Richard's crusade seem to reveal, if nothing else, a discomfort with the matter of crusading — and perhaps even a desire to find a way to tell a children's version of this story and maintain the heroic status of Richard and Robin Hood without implicitly championing crusading and holy war.