My parents (who know me so very, very well) recently sent this incredibly thoughtful and generous gift to me for my birthday: 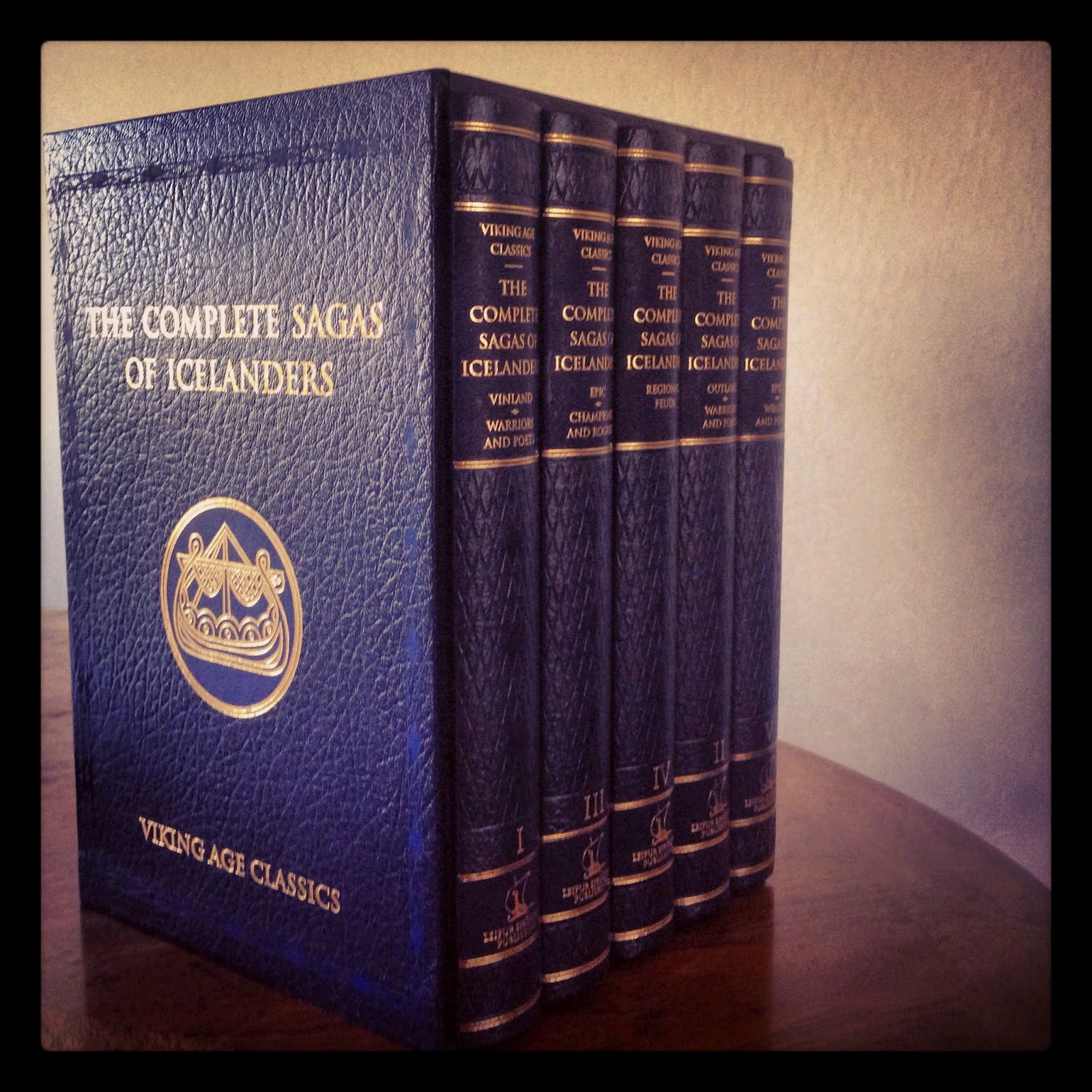 Since traveling to Iceland in 2006, I've acquired an ever-increasing interest in the country and its literature. I have vivid memories of wandering around the Culture House during that initial visit, marveling over the stunning manuscripts on display and by the fact that modern Icelandic is in many ways merely an upgraded version of the language in which the sagas were written (I was told, at the time, that there exists a greater difference between Shakespearean English and modern English -- quite remarkable, given the centuries that lie between the composition of these sagas and today). And when I visited Iceland again in 2009 (the Snaefellsness peninsula in particular), I was struck by the way in which the sagas are evoked. It seemed that everywhere I looked, I found placards retelling or quoting passages from sagas that took place in those particular areas. I don't know when I've seen a nation's literature etched so lovingly into its terrain.

I've read several sagas over the years, but have always found myself amazed by their vast quantity and the sheer number of them I have yet to explore. I've also become increasingly drawn to the sagas of Icelanders specifically because of my burgeoning interest in world-building; as I mentioned a while back, I had the immense privilege of organizing a roundtable on medieval world-building as one of BABEL's sessions at this past Kalamazoo. To my delight, the session was very well-received, and I am now in the process of assembling a special volume on the topic for postmedieval (due out in early 2018). As the editor of the volume, I'll be writing a general introduction, and I'm leaning towards using the Icelandic sagas as a starting point. Because, as the editors of this collection point out:

. . . the world of the sagas and the tales is a unified whole in several senses. They belong to the same geographical setting and tell of a particular period in history. They also share a recognizable narrative technique, although individual sagas often differ sharply in style and content. Each saga highlights various aspects of this common world and presents it from an individual perspective. (1.xv)

Needless to say, I'm especially eager to explore more of the Icelandic sagas in light of this project. I want to see firsthand how world-building occurs in these narratives and how the aforementioned consistency can be born out of the work of numerous (almost entirely anonymous) authors and copyists. I was, as a result, beyond thrilled to receive this gift. It feels like it weighs a good ten pounds more than my daughter, and it contains all of the sagas that focus predominately on Icelanders. When I opened the gift and promptly called my parents to thank them, I learned that my dad had also purchased a copy for himself; we all traveled to Iceland together so that they could do some sight-seeing and also help out and visit with their grandbaby while I attended the NCS conference, and my dad and I had an array of wonderful conversations about medieval Iceland and saga literature while there.

So, upon learning that he has a copy of his own, I issued the following challenge: that we would read the collection in its entirety by Christmas 2015. He enthusiastically accepted the challenge, so the game is on!

All of which is to say that you, oh intrepid readers, will be hearing a lot about medieval Iceland between now and December of next year. My plan, at least as it stands right now, is to write at least a brief entry on each saga as I finish them. Currently up: Eyrbyggja saga, which includes tales of cow-killing revenants, witches, and "elf-frighteners." More on all of that later!
Posted by Leila K. Norako at 7:03 PM