The Ship of Theseus and The Stave Church

The ship wherein Theseus and the youth of Athens returned had thirty oars, and was preserved by the Athenians down even to the time of Demetrius Phalereus, for they took away the old planks as they decayed, putting in new and stronger timber in their place, insomuch that this ship became a standing example among the philosophers, for the logical question of things that grow; one side holding that the ship remained the same, and the other contending that it was not the same.

About this time last year, I had the immense pleasure of traveling to Norway for a couple of weeks. I mainly went to attend the Nordic Branch of the International Arthurian Society’s phenomenal conference, which focused on Northern versions of Arthurian narratives, but I also allowed myself time before and after the conference to do as much sightseeing as I could. Flying solo in a country I'd never visited before turned each day into an adventure, and one of my favorite – and perhaps insane – capers involved an all-day driving trip through the fjords north of Bergen to get to Urnes, perhaps the most famous (or at least famously carved) stave churches in all of Norway. 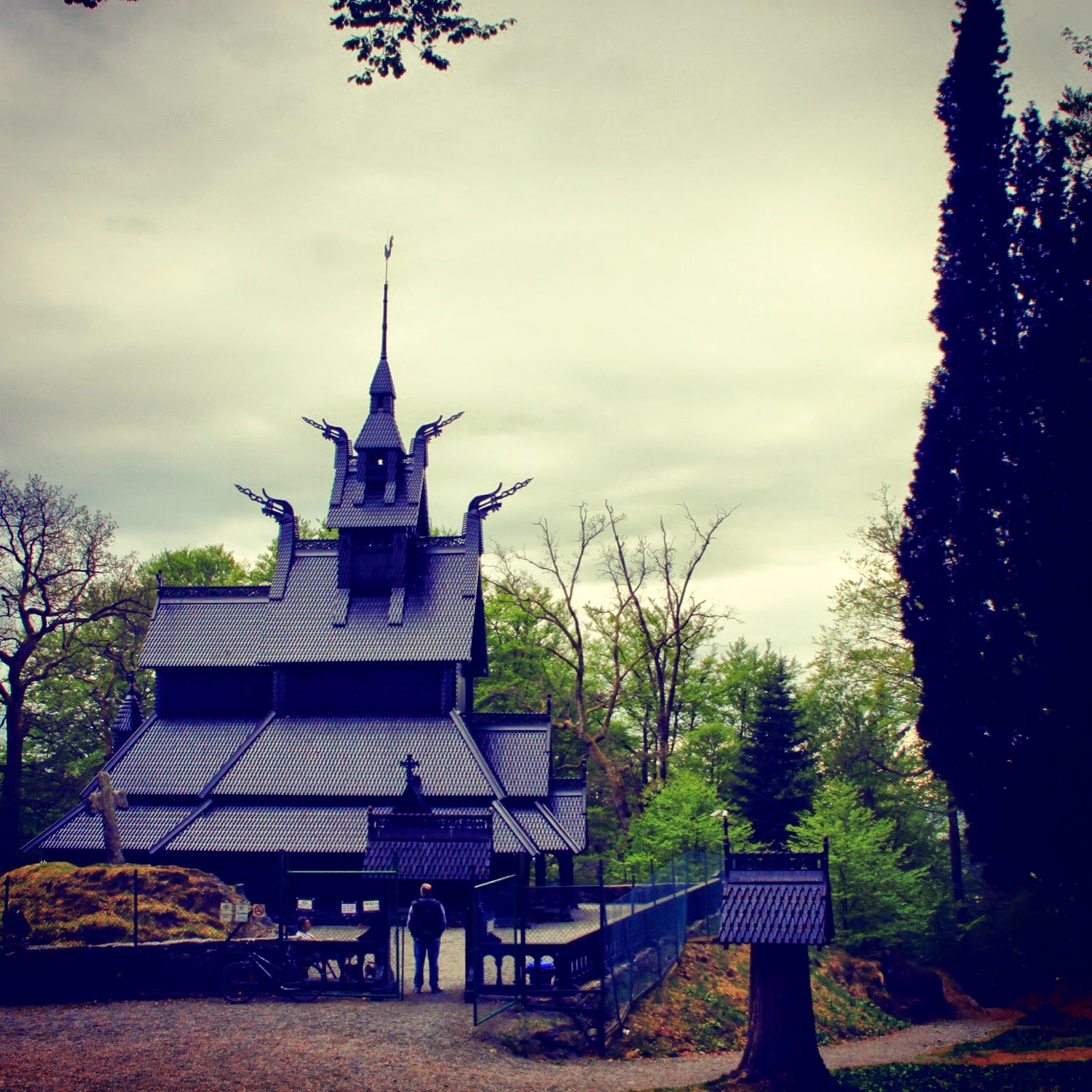 The day before the trip to Urnes, however, I visited Fantoft, a stave church lovingly rebuilt after it was burned down by members of the Norwegian black metal scene in 1992. Tragic as its near total destruction was, what I found most remarkable about Fantoft was the way in which it was rebuilt. According to the Armenian guide and proprietor (Bergen surprised and delighted me in being as multicultural as it is), the church was reconstructed using the same building methods and materials that would have been used to construct the original. It apparently took a significant amount of time just to build the tools necessary for the reconstruction efforts, and the woman who commissioned the project only allowed a few modern materials and methods to be used in order to ensure that she'd be able to see it completed before she died. On the whole, however, the rebuilt Fantoft is essentially as it was -- the builders even used trees that would have existed when the original was first built. 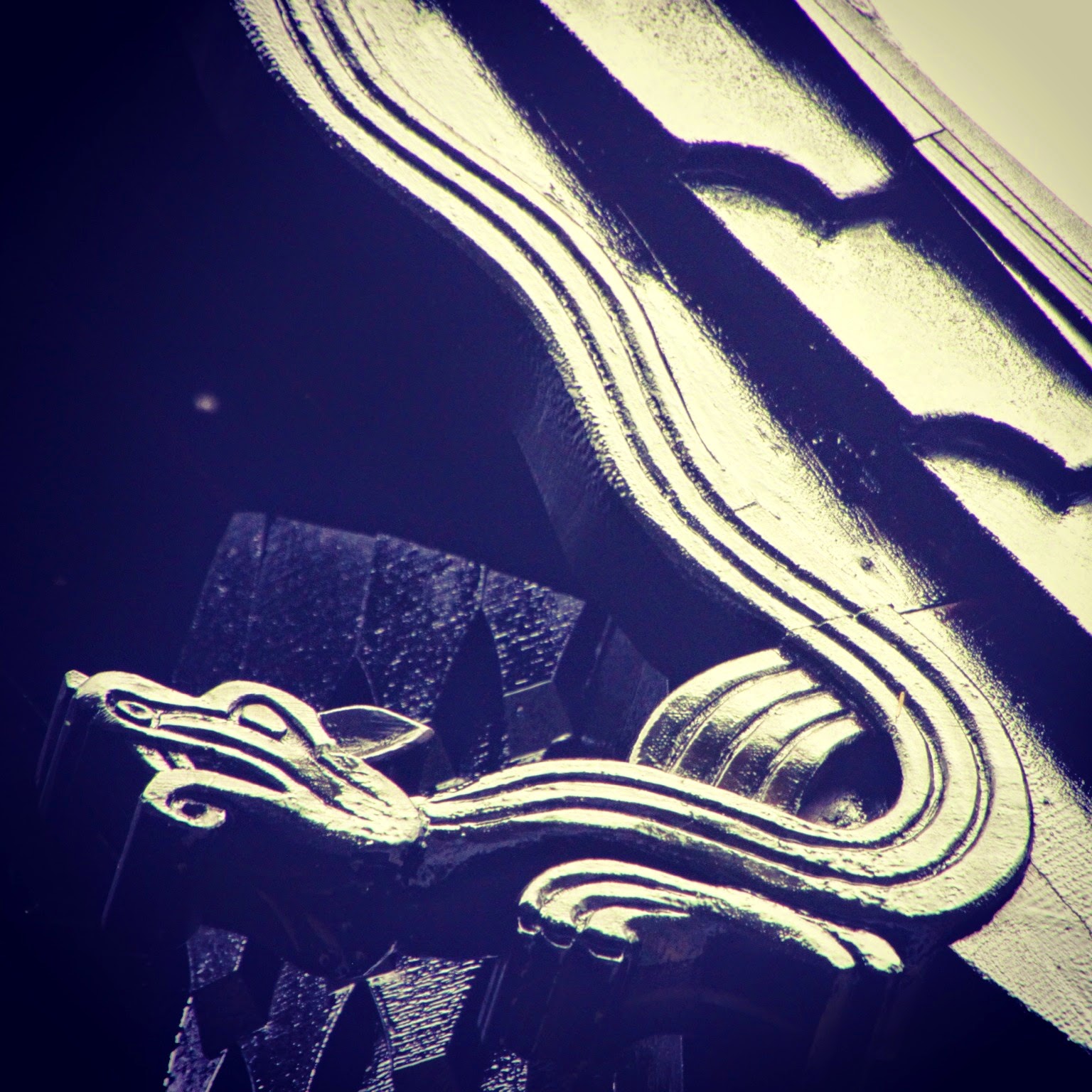 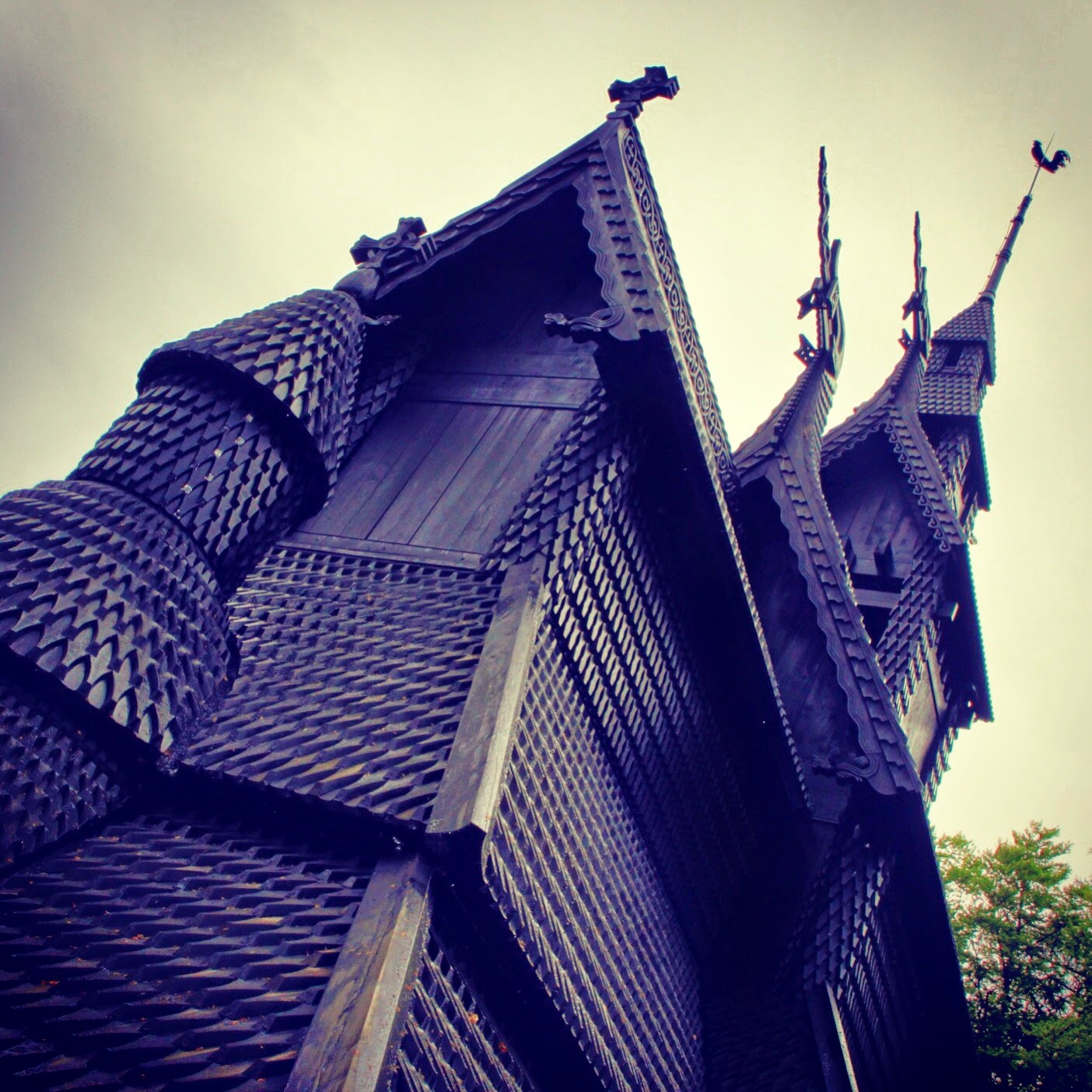 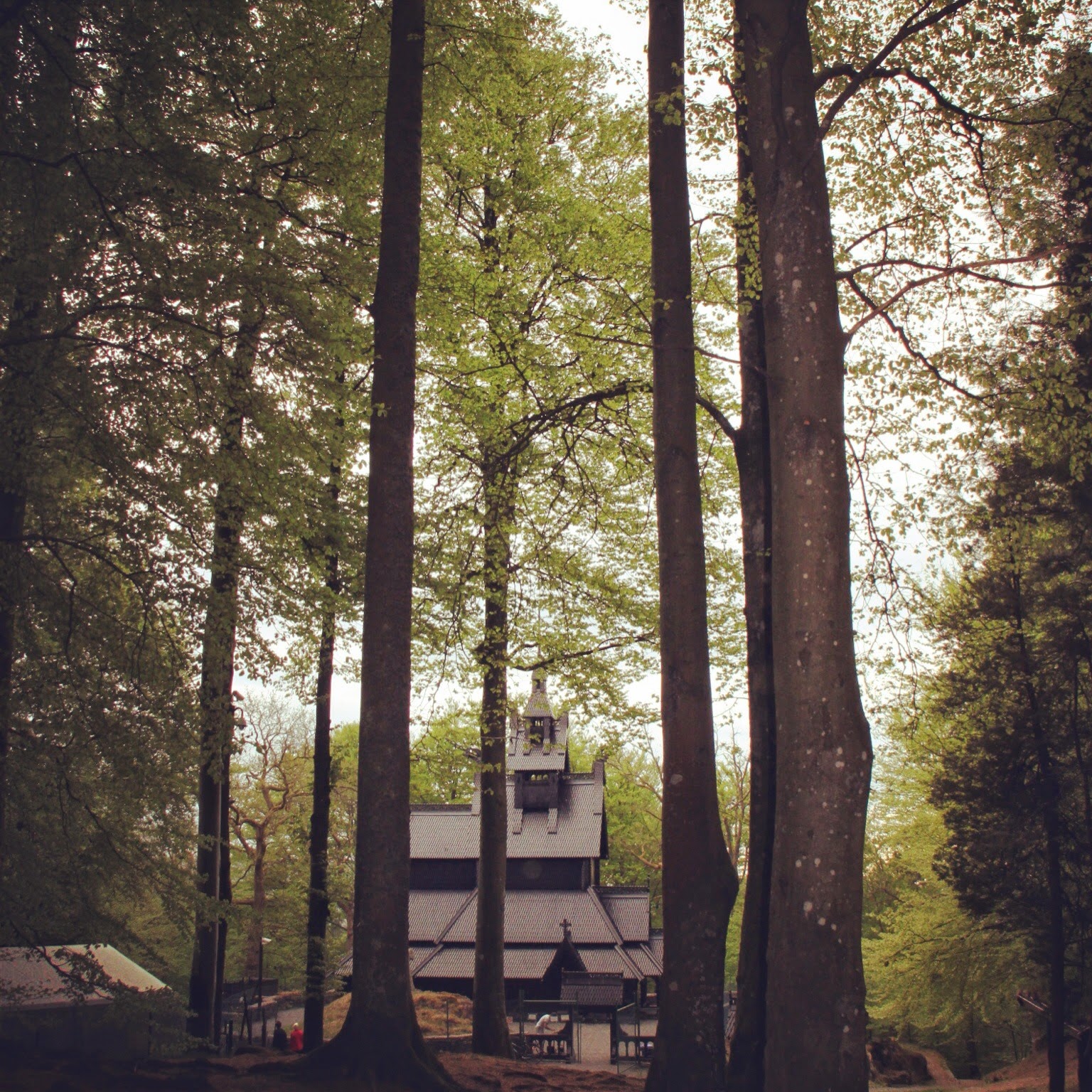 Fantoft sits nestled in the woods just a short walk from the Bergen Light Rail. I made my way there in the afternoon, after having spent several hours wandering around and picnicking at Trollhaugen, Grieg’s marvelous home. The clouds had settled in, and the woods were calm and quiet. The church appeared slowly as I rounded a bend in the trail, and I was immediately struck by its imposing structure, with its pitch-dark wood and dragon head embellishments. When I approached the church itself, I smelled the pungent tar recently applied to the entire exterior of the church as a protectant. Important note: if you have the good fortune to stumble upon a recently-tarred stave church, DO NOT get so entranced by the architecture that you lean up against a pillar for the sake of a good photo. You will invariably take home a permanent patch of said tar on whatever you were wearing. 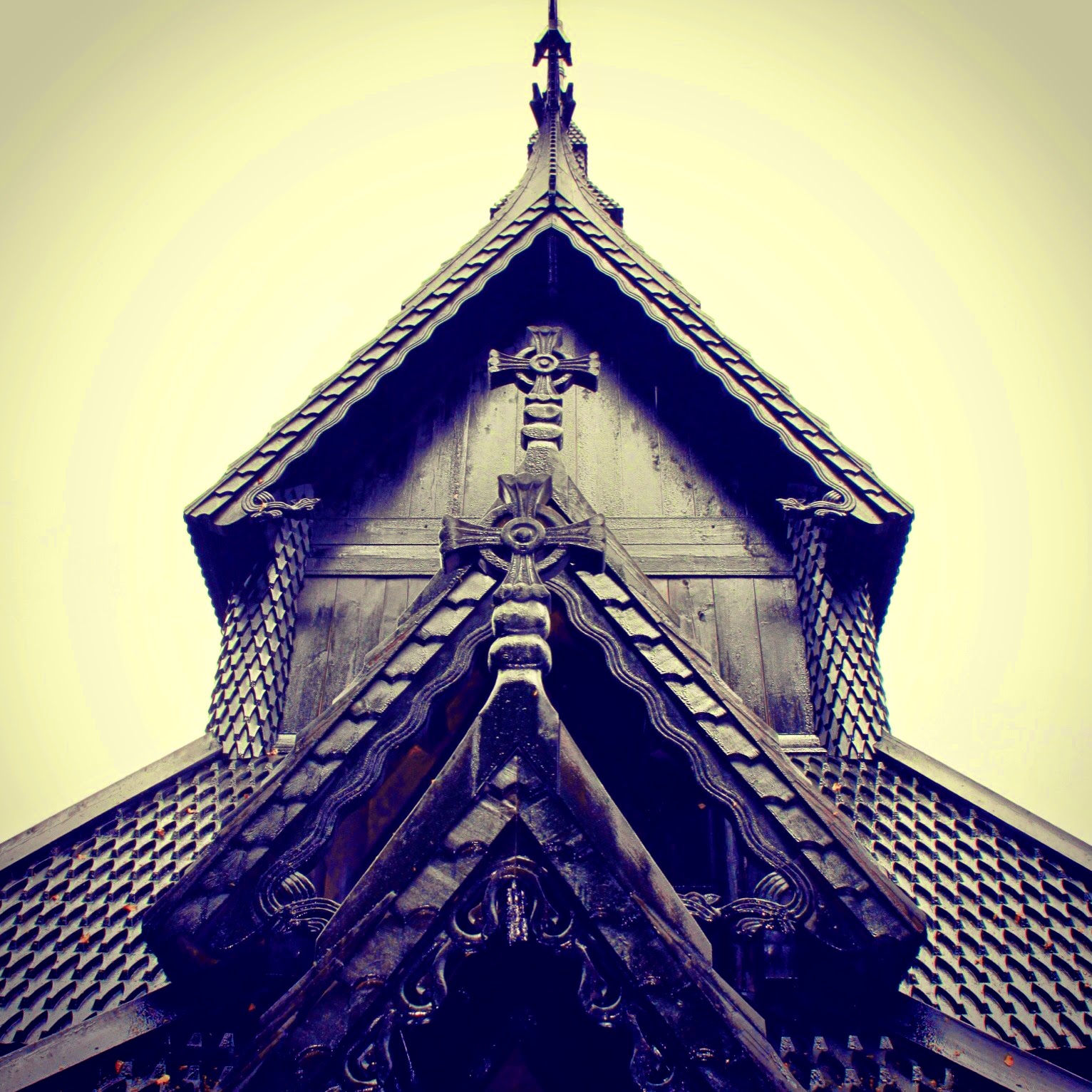 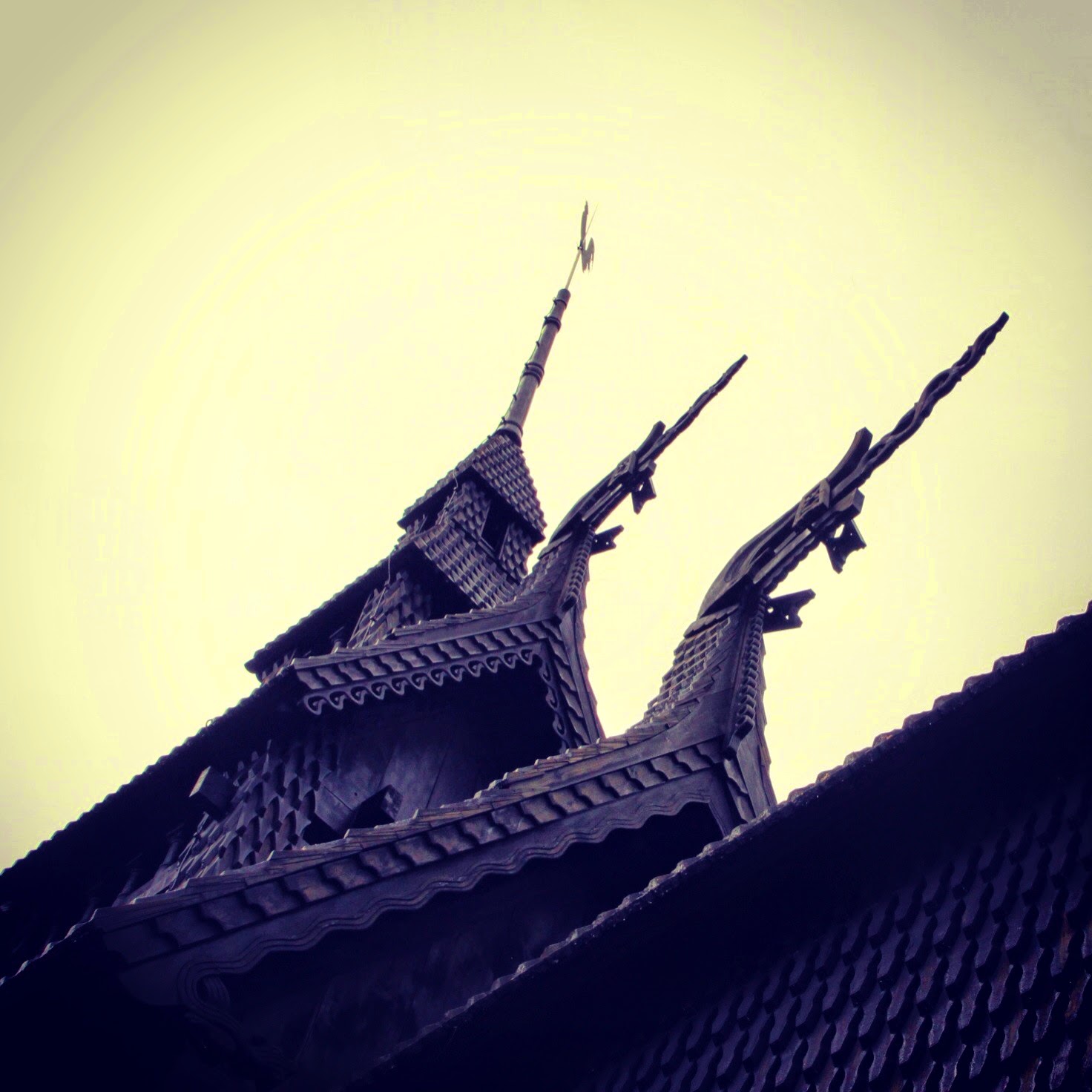 I took my time examining the exterior and the interior of the church, marveling at the woodwork, the depictions of Sigurd and the dragon Fafnir on the pews, and the care that clearly went into the entire building process. As I made my way out,  I struck up a conversation with the Armenian caretaker. As I mentioned previously, he told me all about the reconstruction process, but also described a heated conversation he had with a few Norwegian officials who came to Fantoft a while back. To the complete irritation of this caretaker, they kept referring to the building as a replica. As he explained to me (quite animatedly), this church is in many ways — by virtue of its careful reconstruction — a far purer representation of a medieval stave church than many of the "originals" still dotting Norway's landscape. He made this point by observing that most of those very churches have had pieces replaced many times over, and that the repairs have typically been modern in their materials and practices (from contemporary tools to modern nails).  To him, Fantoft was a pure and authentic a stave church as one could hope to see. 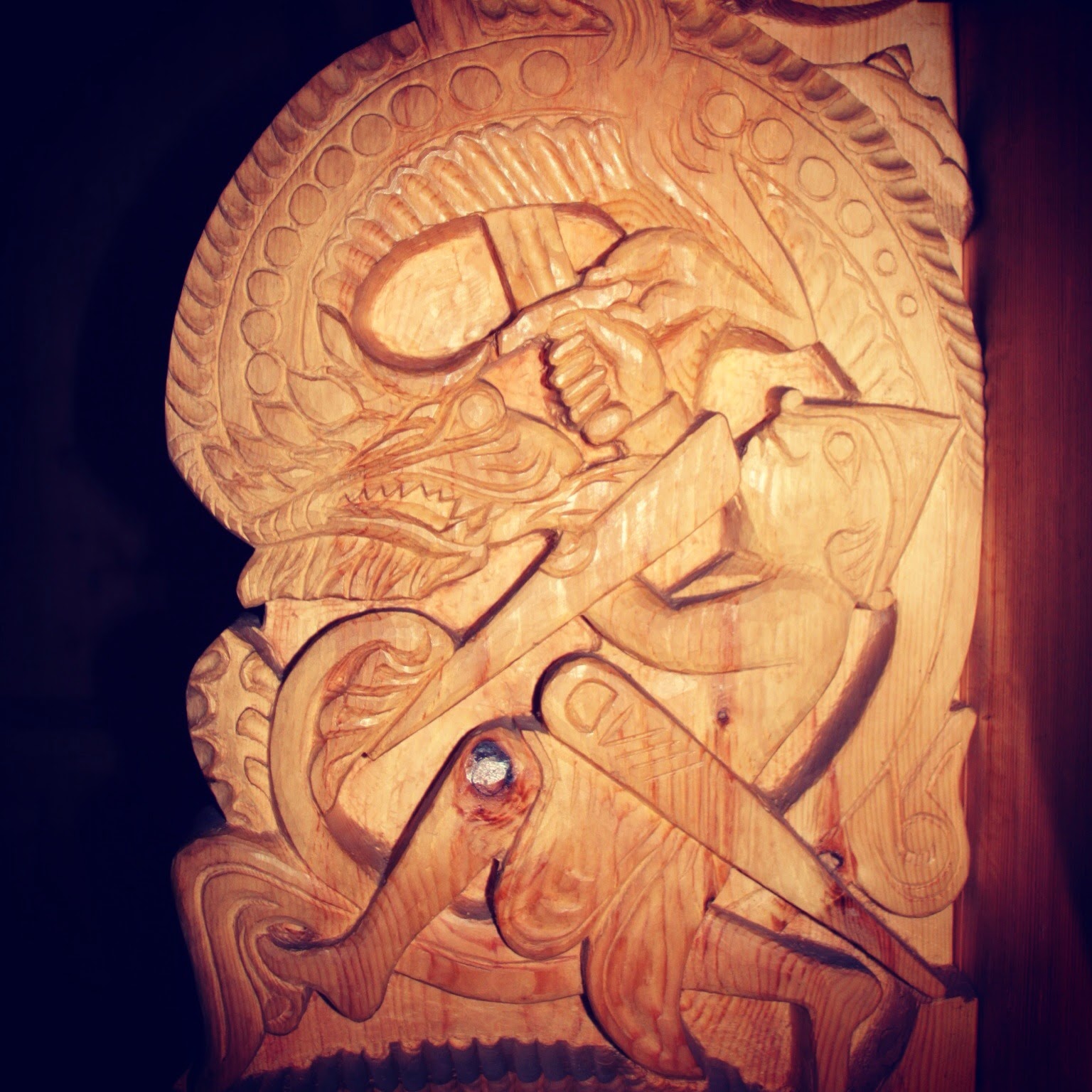 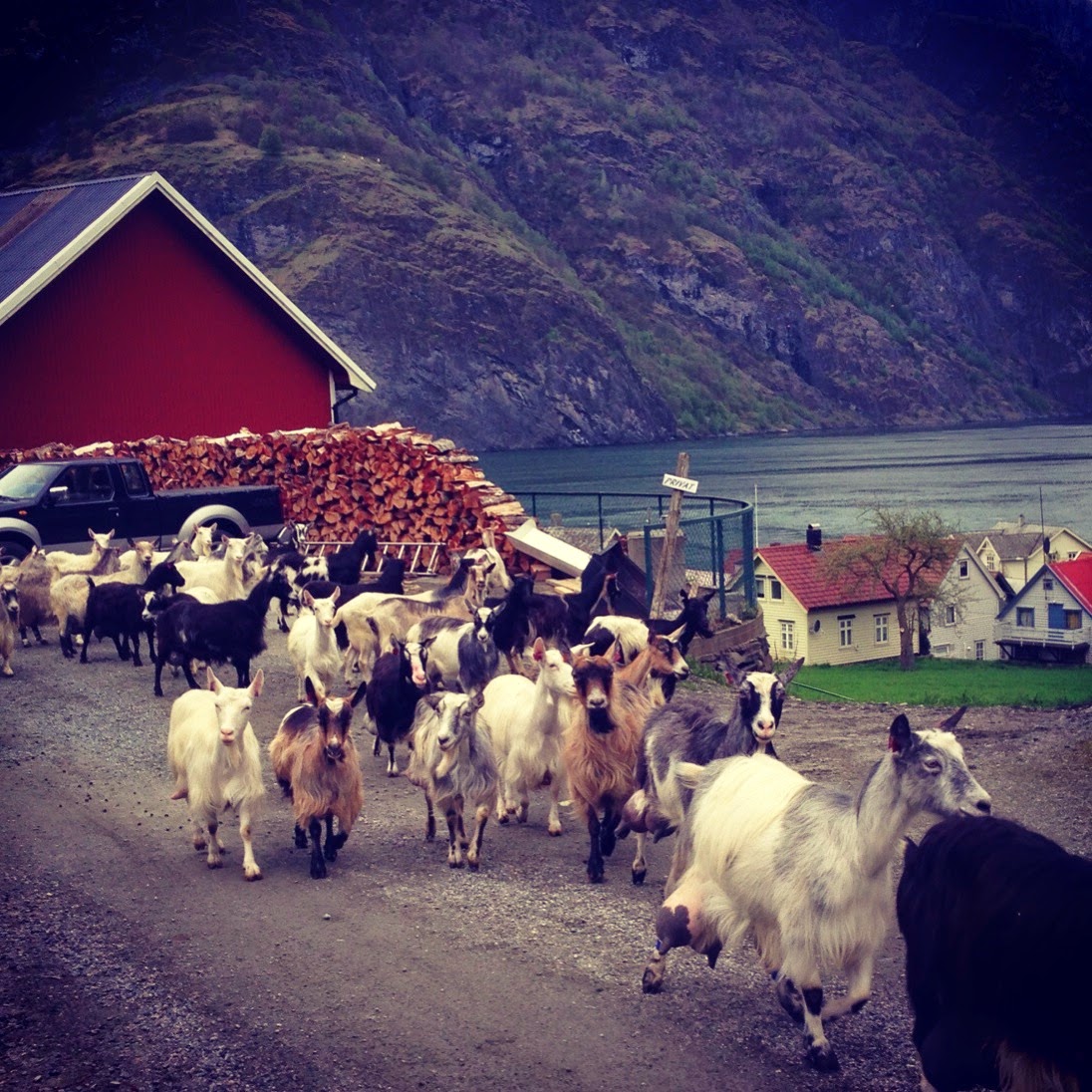 My exploration (and mounting obsession) with stave churches continued as I wound my way through the fjords the following day.  Given that I was driving from Bergen and had to return to the city that evening in order to fly to Oslo the following morning (!!!!), the day trip was more than ambitious, but despite (or even because of) the rollicking pace, I managed to have an absolutely magical time. I tried to limit the stops along the way in order to give myself a good chance of making one of the afternoon ferry boats to Urnes, but I did linger for a little while in a tiny town called Undredal, famous for two things: its stave church and its goats, both of which greeted me simultaneously as soon as I got out of my car. There are, I think, few things more entertaining than finding yourself gently stampeded by a herd of shaggy, inquisitive goats. That I managed to exit the herd with all of my clothing intact (and barely chewed) is nothing short of a miracle.

Goat stampede or no goat stampede, the church itself was well worth the stop. As I was the only visitor, I enjoyed a personal tour of the building by its proprietor, and learned all about the various additions to the building over the years. More than anything, I was struck (and somewhat baffled) by the bizarre figures painted on the ceiling. The decorated ceiling was only "discovered" in 1962 when the building was restored and the layers of paint peeled away. Wikipedia will tell you that the ceiling is adorned with angels and saints, but while there certainly are some angels, the guide admitted that no one has really been able to identify the other figures.  The church also contains an array of adornments that have accumulated over the years. According to my guide, deer-head chandelier is likely medieval, as is one of the church bells, whereas the pulpit and the candlesticks date to the late 17th and early 18th century respectively. These artifacts stand as reminders that the church has been in continuous use for well over nine hundred years and has undergone several renovations and modifications -- the building exterior, in fact, was covered in scaffolding when I visited. 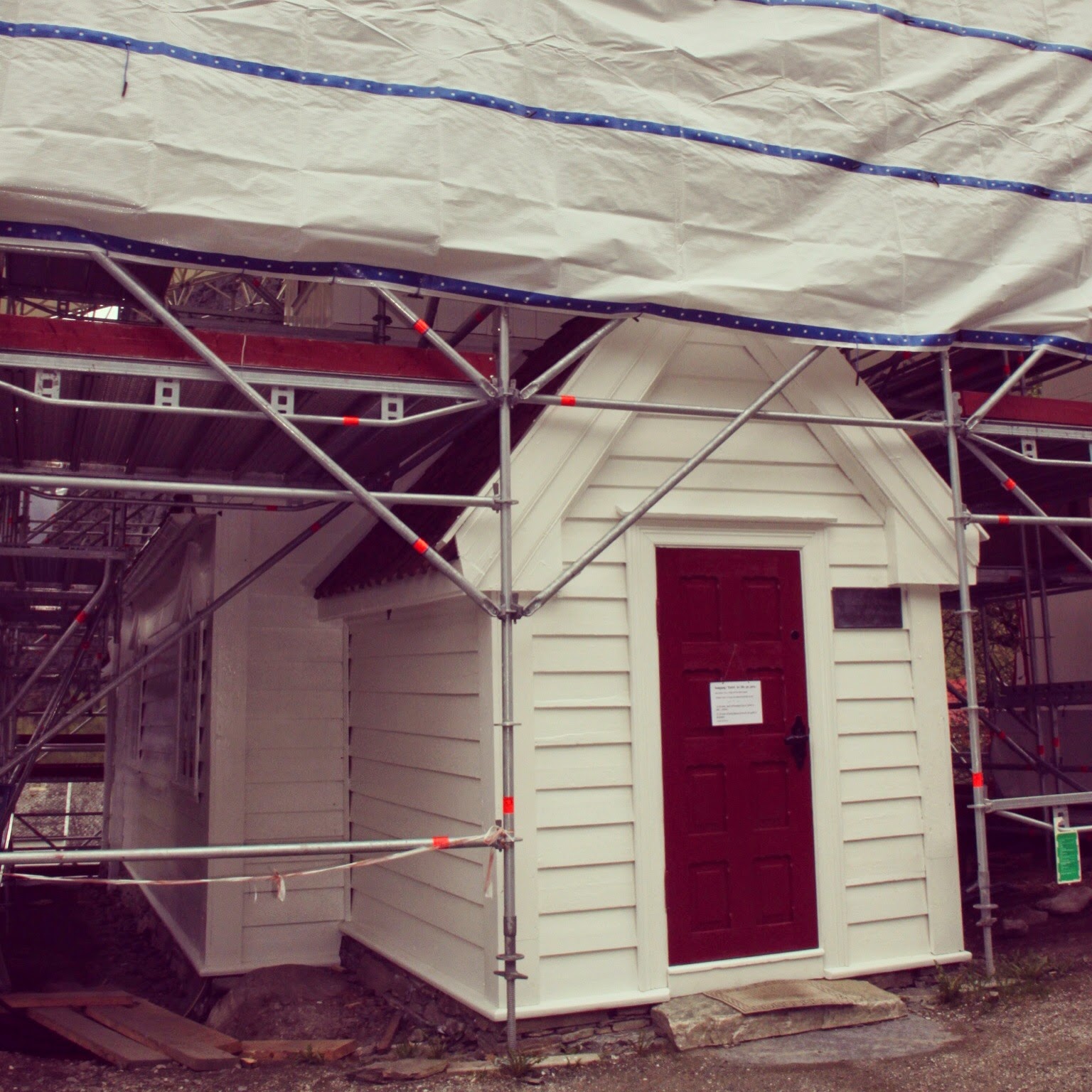 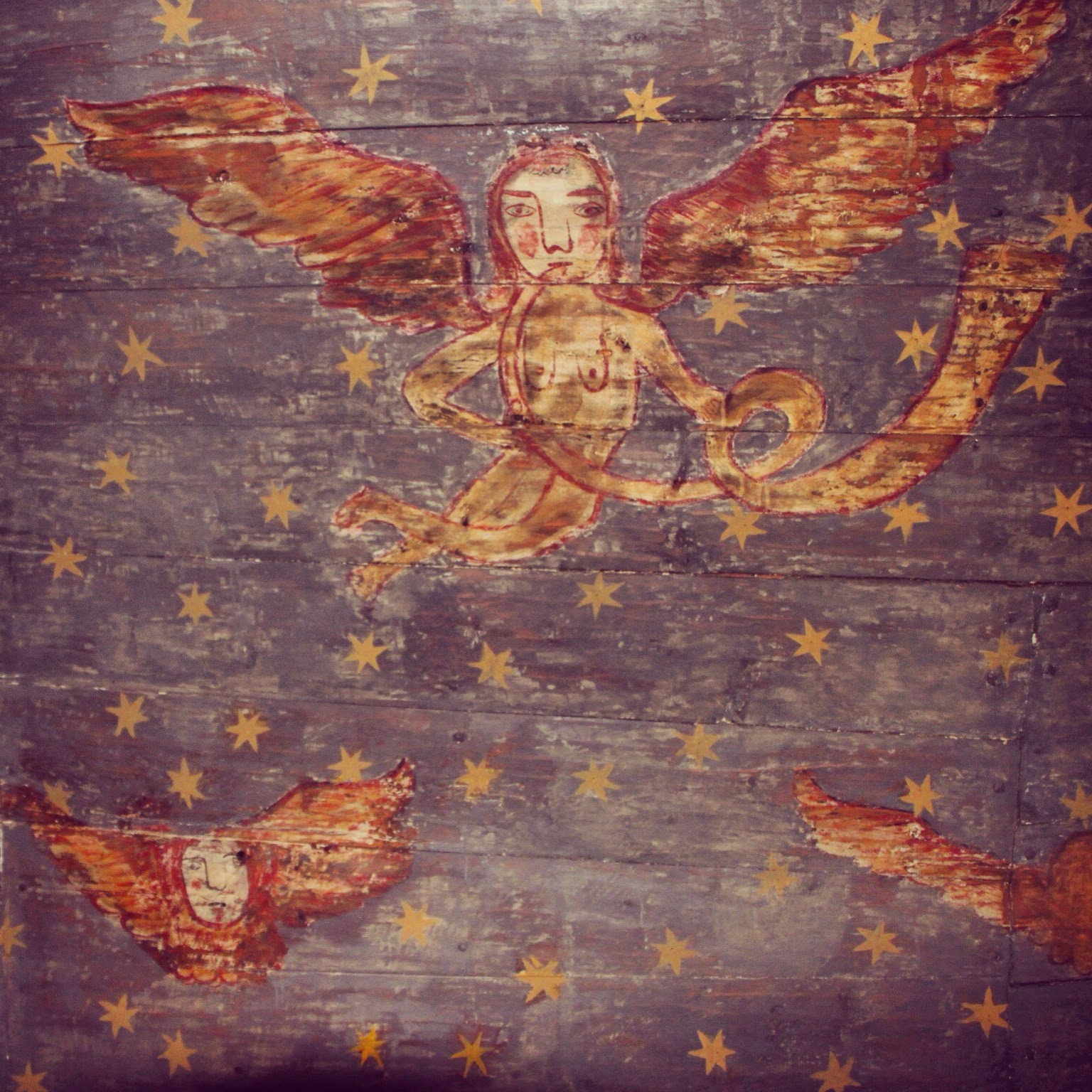 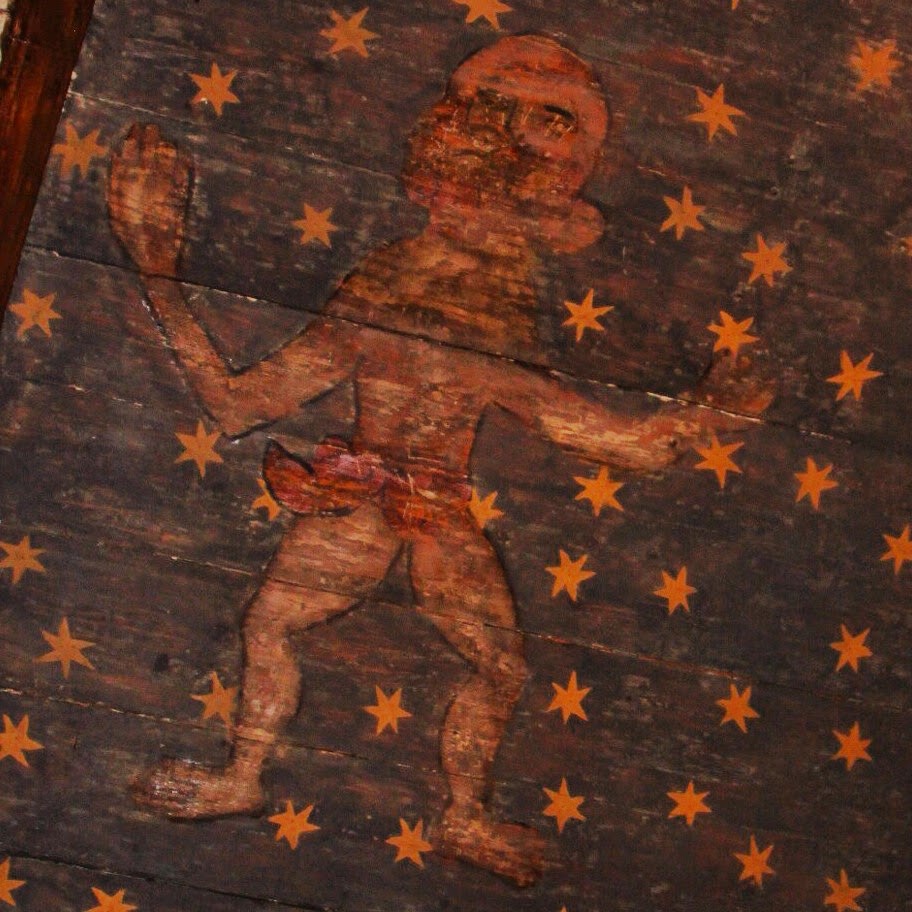 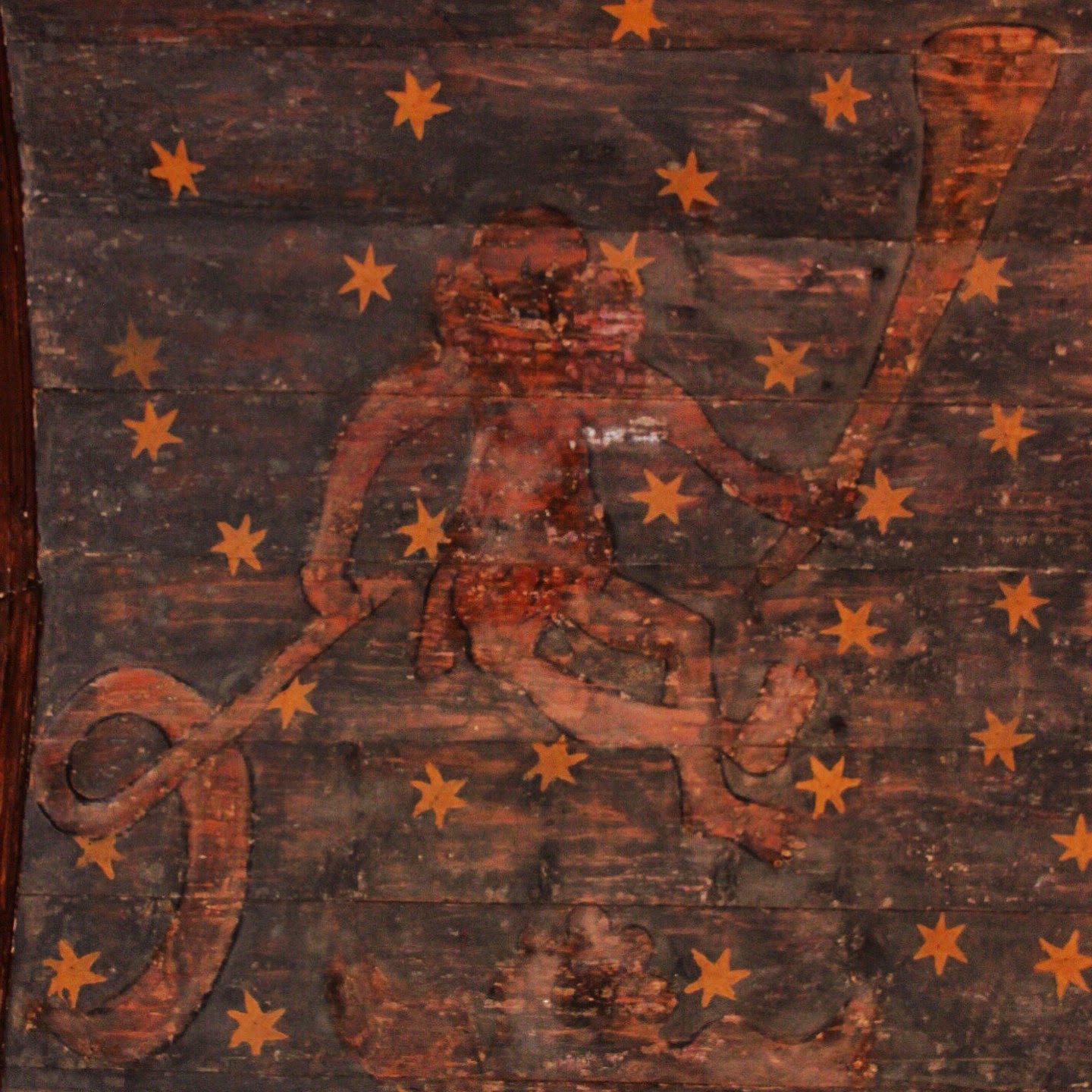 Wandering through the church at Undredal was a markedly different experience from the one I had at Fantoft. Remnants of the original 12th-century building remained, but the church felt and looked much more like a temporal collage -- and an impressive one at that. So many centuries crammed into such a diminutive space. 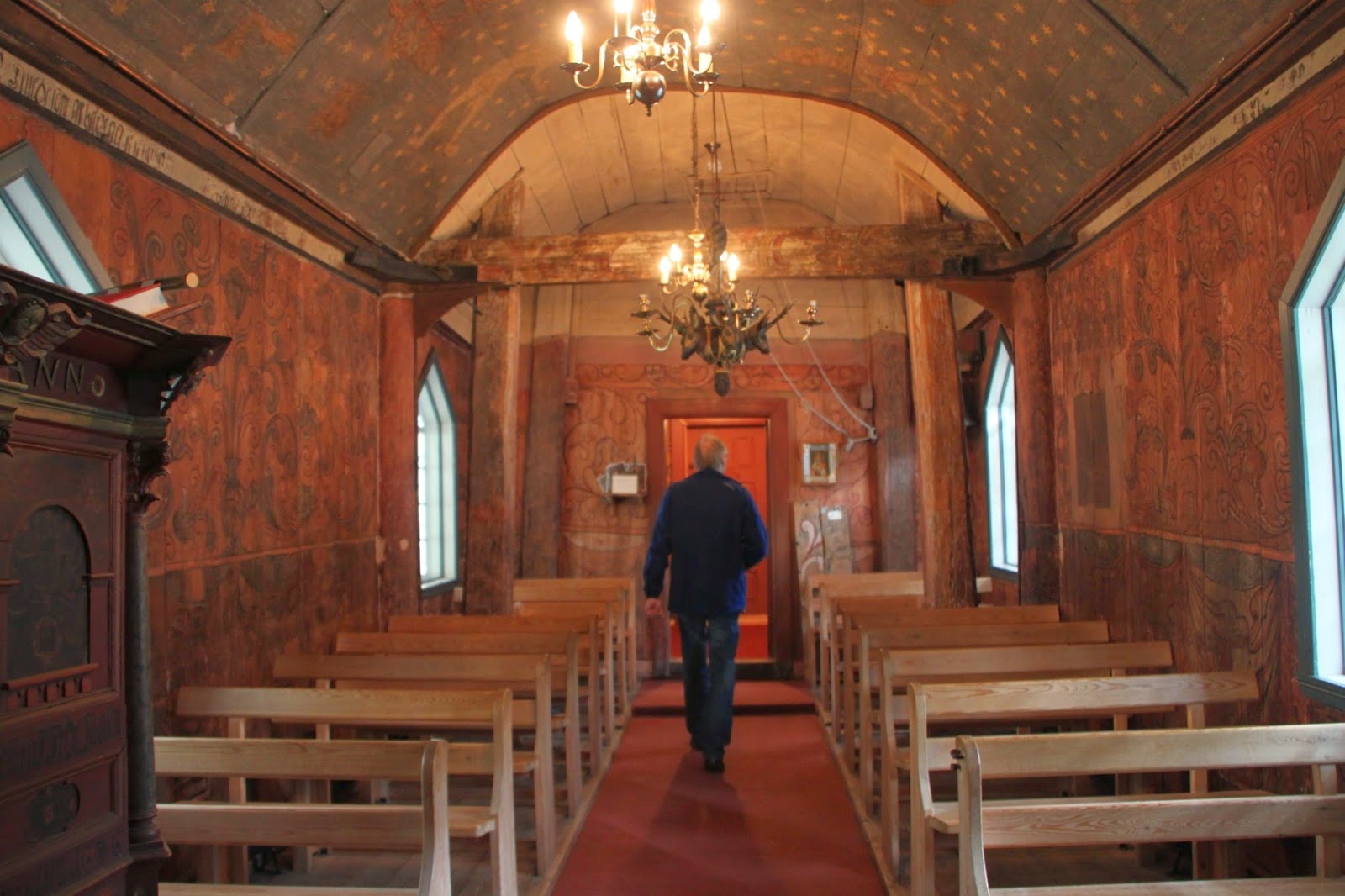 From there, I wound my way up and down hair-pinned, mountainous roads towards Urnes and barely made the afternoon ferry! I decided to stretch my legs a bit and left my car back at the ferry stop so that I could hike my way up to the church. It seemed like a grand idea at the time, and in many ways it was, but I nearly missed the return boat and had to run -- backpack and all -- straight down the hill through some lovely apple orchards, feeling all the while like a graceless Bilbo heading off for his adventure. 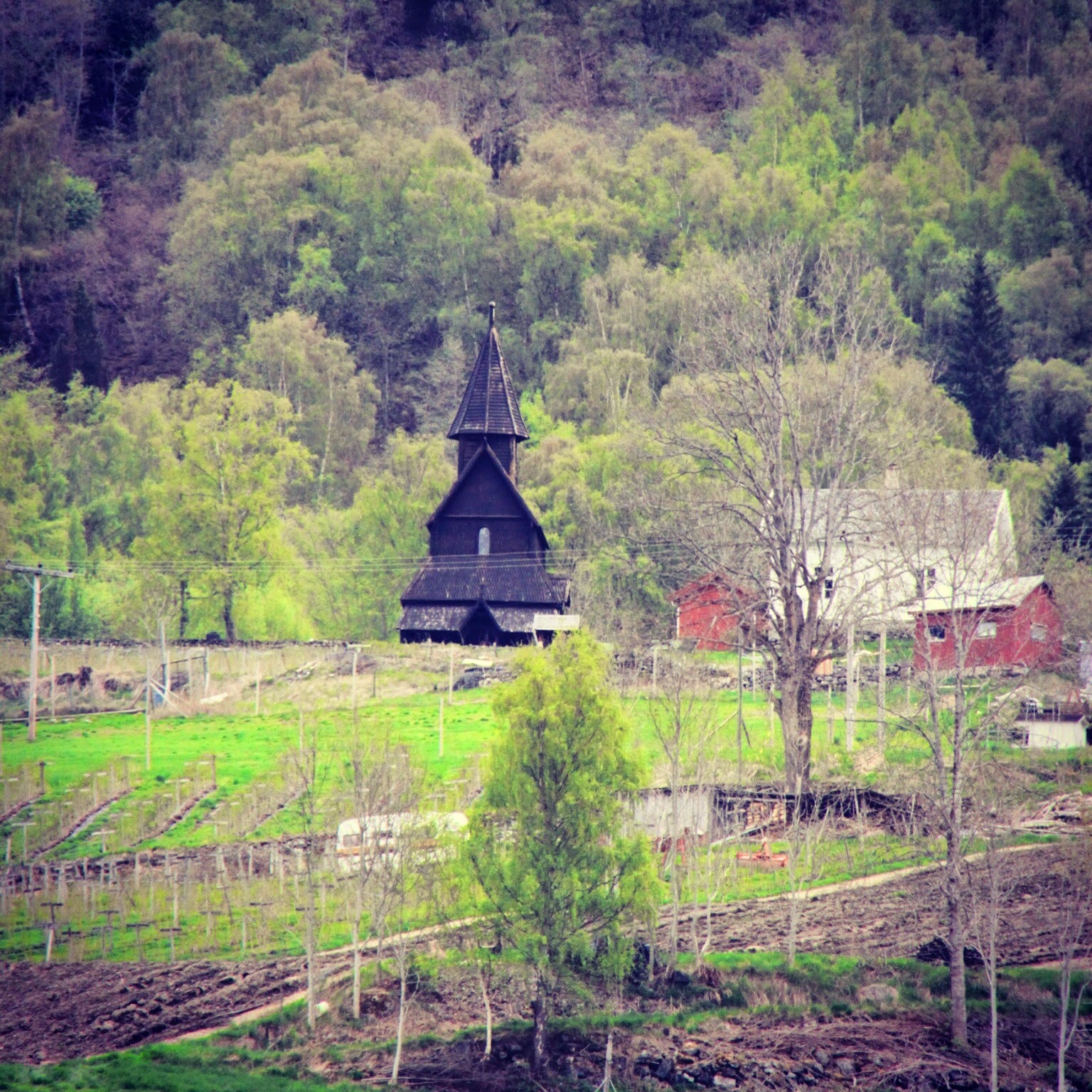 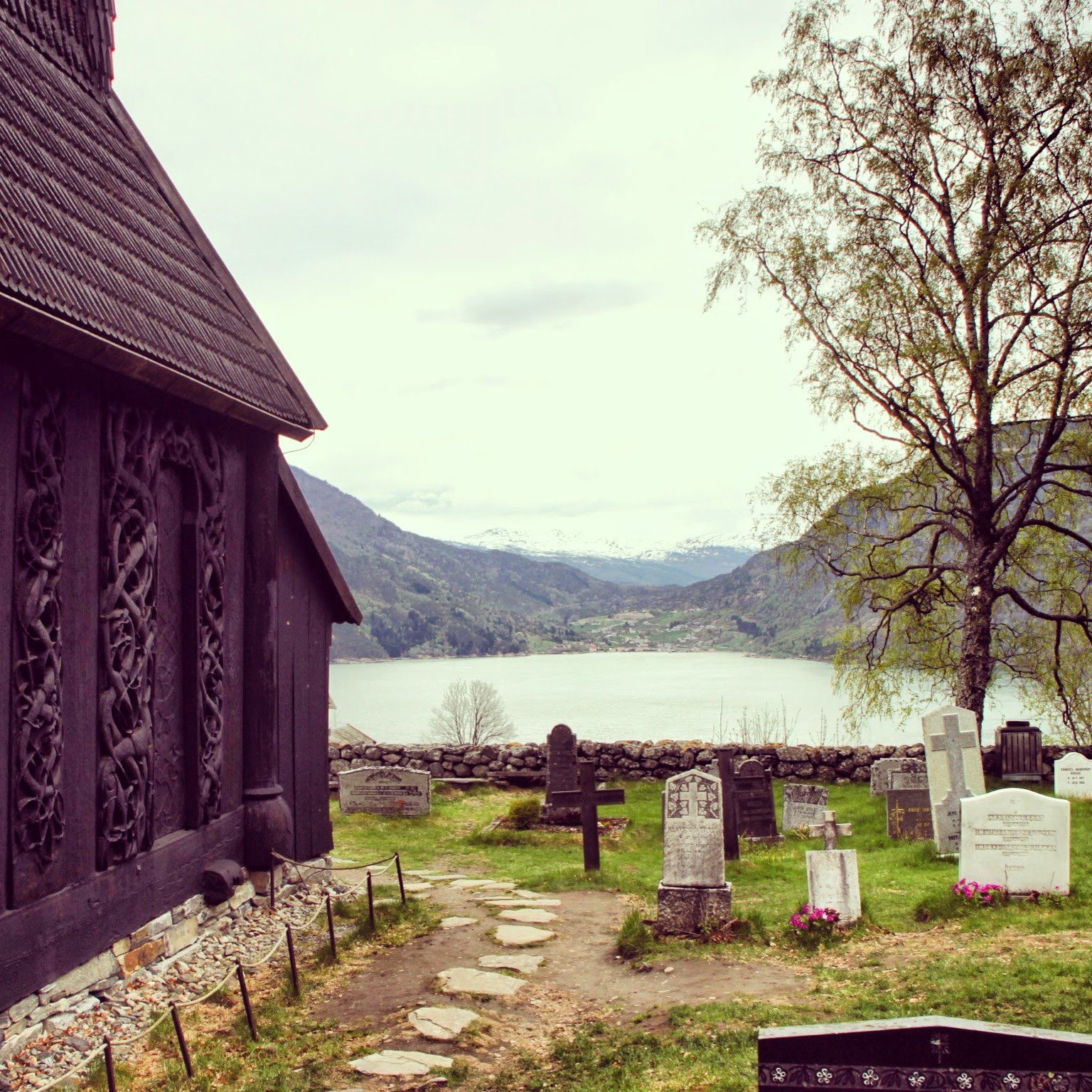 Urnes was absolutely gorgeous, and well worth all the careening there and back. I could see it perched on top of the hill as I approached the small town by ferry, and the carvings that have made it famous — and for which an entire style of animal ornamentation gets its name — are nothing short of spectacular. The stave church is one of the oldest in Norway and still stands at its original location (many extant stave churches have been moved over the years). Like the church at Undredal, this one has seen numerous renovations as well as structural and decorative additions over the centuries. What is more, three churches occupied this space prior to the current one. The famous carvings are likely from one of these earlier buildings, and their meaning -- like the meaning of the ceiling paintings at Undredal -- remains elusive. The most common explanation is that the large figure is a lion consuming a snake, and that this represents the struggle between good an evil. It is also possible, however, that the large figure is Níðhöggr, the dragon from Norse mythology that chews on the roots of the world tree Yggdrasil.

Walking around and inside the church felt like a mixture of my experiences at Undredal and Fantoft. The main draw for me had been the chance to see the medieval carvings up close and to see the stave church itself in its "natural" setting. What I hadn't anticipated, however, were the numerous and more modern additions the church had enjoyed over the years (most noticeably in the interior which, alas, I was not allowed to photograph). In this way, the interior felt quite similar to that of the church at Undredal, even though the church at Urnes is no longer in regular use. And to a certain extent the exterior offered up a similar experience as well, especially considering that the carved panels likely belonged to an older, now vanished, stave church. 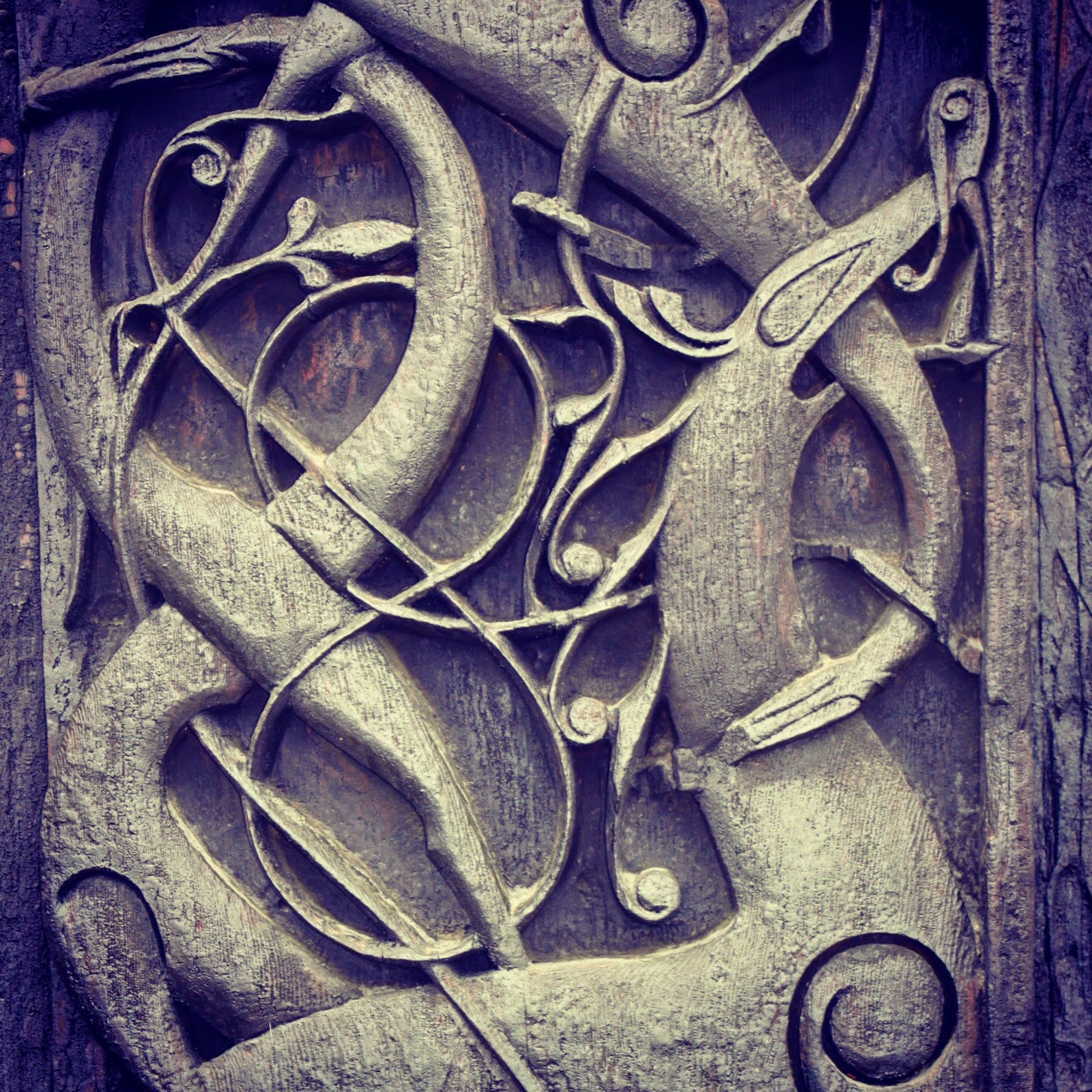 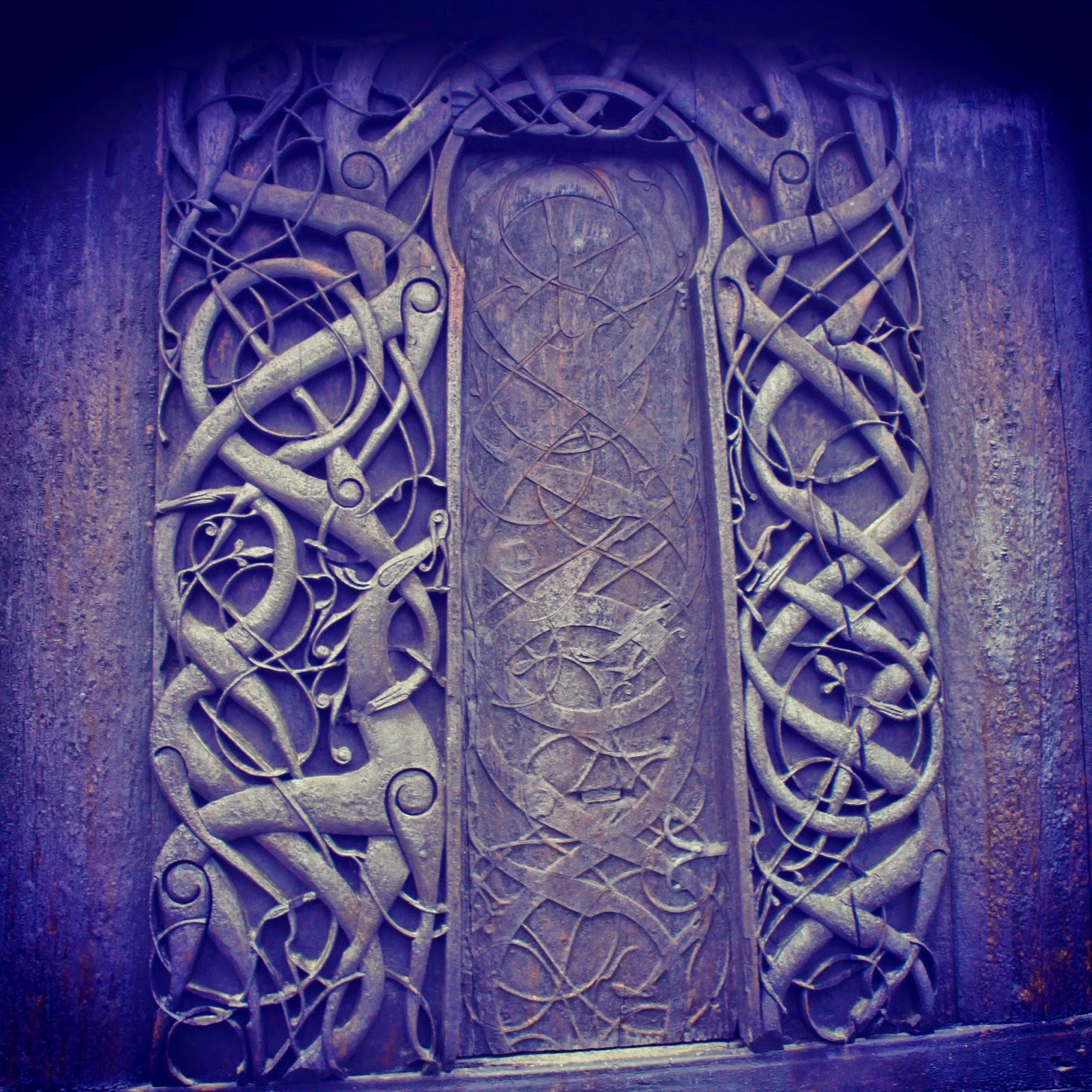 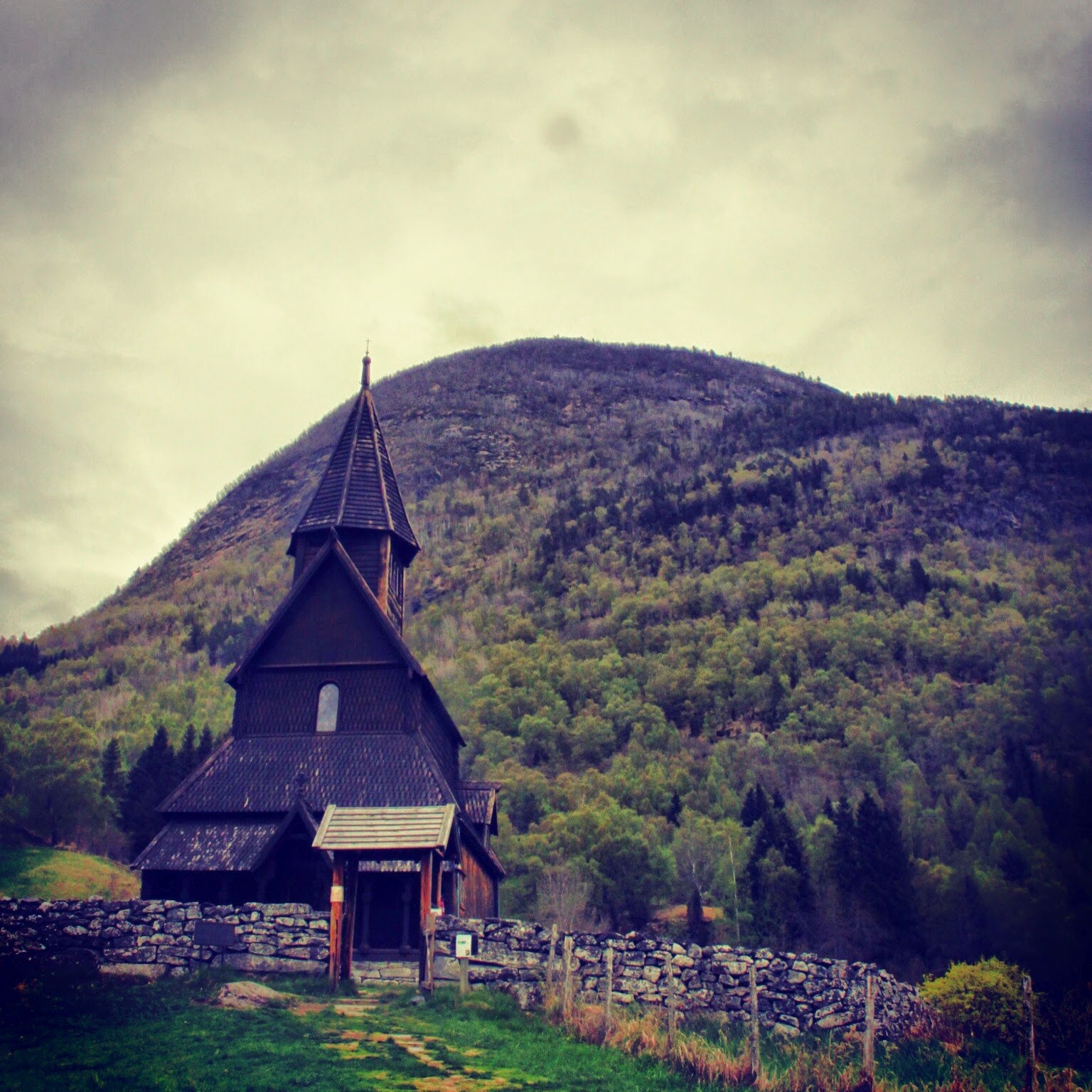 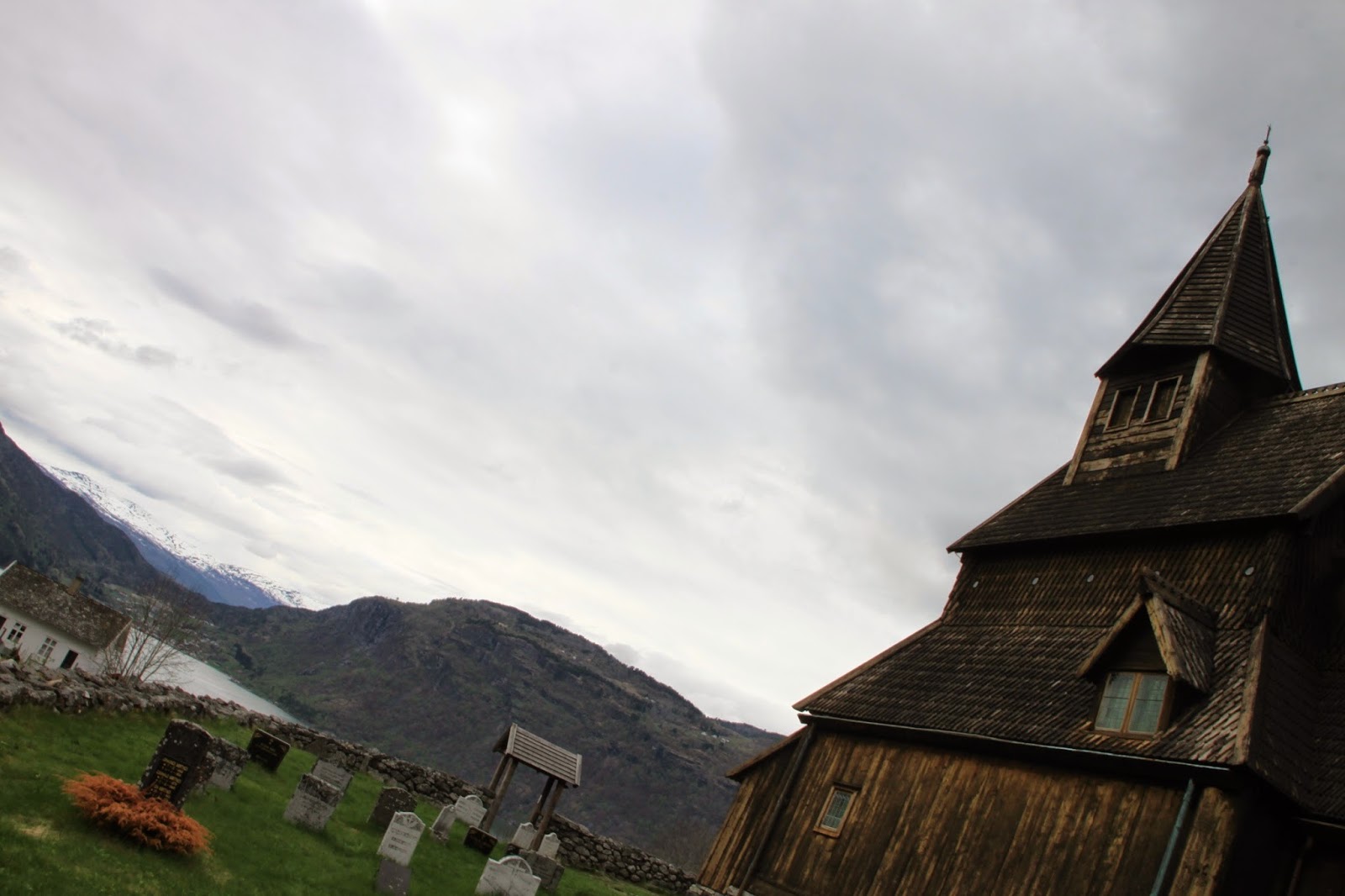 I've found myself wondering on more than one occasion which of the three offer the most "authentic" experience of a stave church. Urnes, with its "original" wooden carvings and its even more original setting? Undredal, given that it remains a living, breathing parish? Or Fantoft, rebuilt so recently yet with painstaking and faithful attention to original methods and materials? As with Theseus' paradox, one could make a compelling argument for any of the three depending on how the criteria for authenticity are prioritized. I still, in all honesty, haven't quite made up my mind. In this way, these remarkable  churches scattered across the Norwegian landscape truly are ships of Theseus, their very existence challenging easy notions of authenticity.  As still-living objects, they invite us to muse upon the very reasons for visiting them, and they challenge us to think long and hard about what makes an object sufficiently and authentically aged. 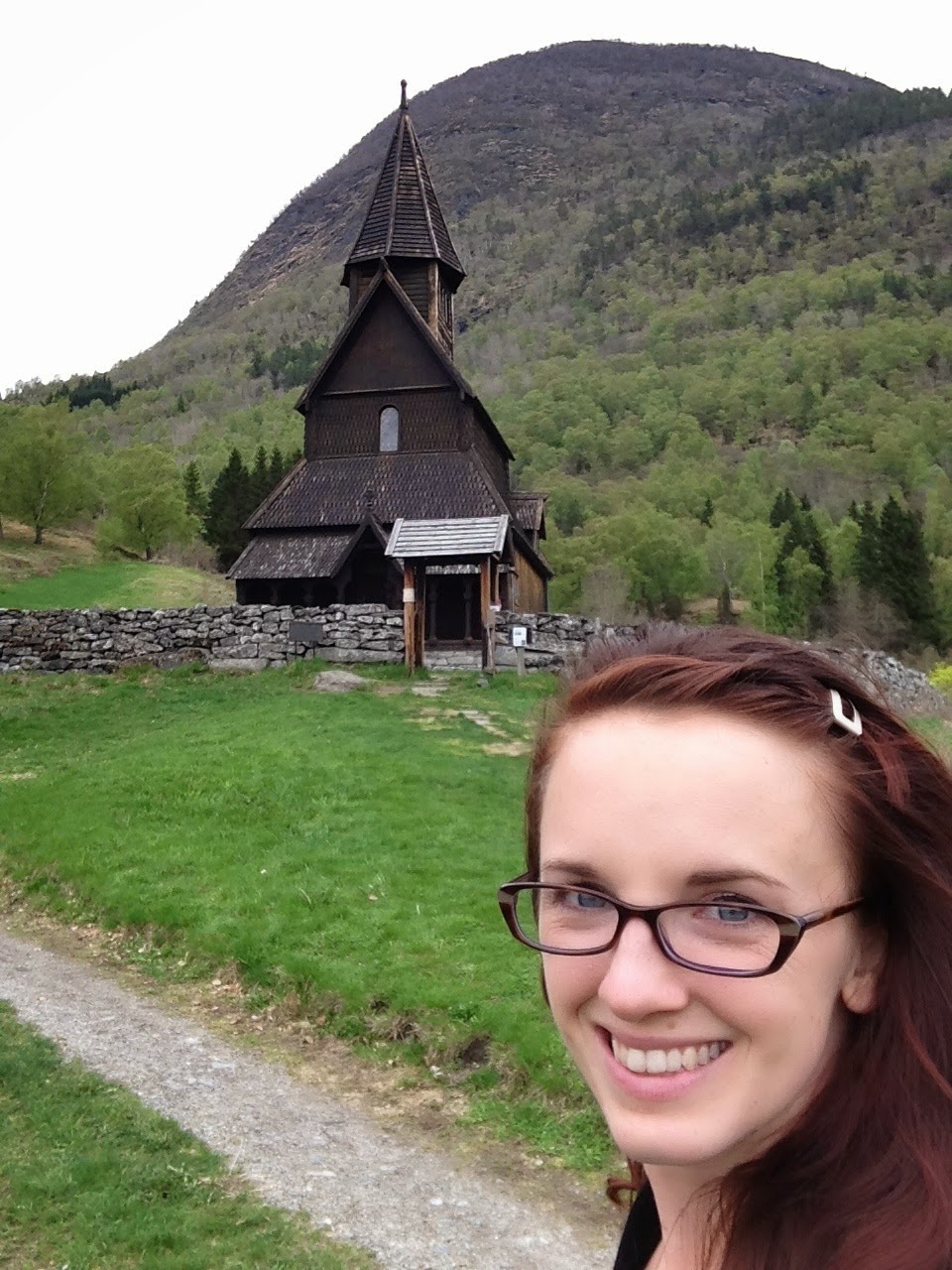