Reactions to Stephen Greenblatt's recent book The Swerve reached a fever pitch on the blogosphere and twittersphere yesterday and today in response to the announcement that the book has been awarded the James Russell Lowell Prize by the MLA. Much has been said already about the book's willful disregard of facts in favor of a highly reductive approach to the roughly thousand-year period known as The Middle Ages, and you can find wonderful responses to the MLA's questionable decision and to Greenblatt's book here, here, here, and here.  The reactions of medievalists and early modernists on Twitter have been equally vivid.

I've been trying to pinpoint why I've been so dismayed by Greenblatt's book and, most recently, about the MLA's decision to give it a prestigious award. I think it comes down to a few concerns, many of which have already been eloquently expressed by the posts I mentioned previously.

One of my primary concerns lies in Greenblatt's baldly outdated approach to the Middle Ages, made very clear in the book's preface when he states: "Something happened in the Renaissance, something that surged up against the constraints that centuries had constructed around curiosity, desire, individuality, sustained attention to the material world, the claims of the body. The cultural shift is notoriously difficult to define, and its significance has been fiercely contested." There is, quite simply, no way to support this statement if you include, say, Alfred the Great's investment in literacy, the popularity of French Fabliaux, the ENTIRE polymorphous "genre" of medieval romance (and let's not forget about Chaucer and Boccaccio).

Another of my concerns ties into the conversation on periodization well underway in the interwebs: click here for a great recap. Call me a naif, but I had thought that we had largely moved passed the idea that the complex millennia between the so-called "Classical" and "Early Modern" periods was nothing more than an intellectual sink hole. As Elaine Treharne so eloquently put it, by presenting this fictionalized view of the Middle Ages, Greenblatt "provides us with a sequence of superficial imaginings that might yet prove damaging to readers who, assured by the prize-winningness of this volume, assume they are being told something other than fiction." This really bothers me — that a book like this one (because of its Dan Brown-esque glitz and its earning both a Pulitzer and the Lowell Prize) has so much potential power to reinscribe and promote popular myths about all things medieval. The fact that much of the damage in The Swerve is done by way of insults made in passing ("[In the Renaissance] it became increasingly possible to turn away from preoccupations with angels and demons . . .") make the work's popularity even more vexing.

As many have already noted, The Swerve is overtly polemical. One of the most obvious of such moments occurs in the passage below, which Jim Hinch explores at length:

"It is possible for a whole culture to turn away from reading and writing. As the Roman Empire crumbled and Christianity became ascendant, as cities decayed, trade declined, and an anxious populace scanned the horizon for barbarian armies, the ancient system of education fell apart. What began as downsizing went on to wholesale abandonment. Schools closed, libraries and academies shut their doors, professional grammarians and teachers of rhetoric found themselves out of work, scribes were no longer given manuscripts to copy. There were more important things to worry about than the fate of books. Lucretius’s poem, so incompatible with any cult of the gods, was attacked, ridiculed, burned, or ignored, and, like Lucretius himself, eventually forgotten.
The idea of pleasure and beauty that the work advanced was forgotten with it. Theology provided an explanation for the chaos of the Dark Ages: human beings were by nature corrupt. Inheritors of the sin of Adam and Eve, they richly deserved every miserable catastrophe that befell them. God cared about human beings, just as a father cared about his wayward children, and the sign of that care was anger. It was only through pain and punishment that a small number could find the narrow gate to salvation. A hatred of pleasure-seeking, a vision of God’s providential rage, and an obsession with the afterlife: these were death knells of everything Lucretius represented."
Hinch does a beautiful job pointing out the voluminous fallacies in the above quotation, but what struck me most about this passage is how it seems to have far more to to say about very contemporary anxieties over the state of education than it does about the Middle Ages. Like the film 300, it is a fantasy that appropriates historical events in order to fuel personal agenda. In this respect, the passage above, and the general tenor of The Swerve, reminded me of some of Frank Miller's more inflammatory statements offered in an NPR interview shortly before 300 hit theaters:

"Lets talk a minute about the enemy . . .  and the 6th century barbarism that they actually represent. . . . These people saw peoples head's off. They enslave women. They genetically (???) mutilate their daughters. They do not behave by any cultural norms that are sensible to us. I'm speaking into a microphone that never could have been the product of their culture and I'm living in a city where 3,000 of my neighbors were killed by thieves of airplanes they never could have built."

A clue as to the inspiration for Frank Miller's garbled and factually inaccurate description of the Middle East (and for his investment in the film version of 300) lies in that final sentence: his very personal experience of the traumatic events of 9/11. Greenblatt is nowhere near as unhinged as Miller, but a similar tell exists in Greenblatt's book. Indeed, the entire premise of the book seems less inspired by Bacciolini's discovery of Lucrecius that it was by Greenblatt's discovery of Lucretius  as a young man -- a discovery that, no less, allowed him to heal from the emotional traumas of his youth. I have no problem with personal anecdotes (I actually found his willingness to get personal refreshing), and I am not saying that the personal has no place in academic discourse -- Kristi and I frequently interweave the two here, and I recently argued in favor of that kind of approach in an earlier post. I wonder though whether this book might be a perfect example of what can happen when someone becomes far too invested in making a speculative version of history (fueled by personal response) an authoritative one. Far too many of his arguments rely on what I can only describe as personal opinion and bias for their existence, and he disregards (as Bruce Holsinger's recent tweets make hilariously clear) a vast array of information in order to perpetuate his own vision of the so-called "swerve to the modern." This is a hard pill to swallow when I have to explain to students (in almost every class I teach) why you have to rely on MORE than the stuff that's in your own head when you try to substantially add to an academic conversation.

I think, in the end, what I find so problematic about The Swerve and the accolades it has earned is this: that the author makes the same rhetorical mistakes (over and over again) that I find in freshman essays. I expect to find these kinds of mistakes in the latter, just as I expect to encounter misconceptions about the Middle Ages (or in Frank Miller's case, the Middle East and its inhabitants) in popular culture. But it's more than frustrating to see those kinds of errors not just overlooked but actively perpetuated (and rewarded) in a book written by a well-known scholar. What kind of example is this possibly setting for the students we teach and in whom the MLA is ostensibly invested? What kind of example is it setting for discourse in general? What does it mean that factual inaccuracy and dated polemic are overlooked by prestigious award committees in favor of rhetorical swagger?

Ok -- I think I've vented my spleen enough for one day. Time to practice sochin (the Mjollnir of all katas . . . good lord, did I just write that?!?!) and listen to Tool on repeat while doing so. I will, however, leave you with the following (my very first meme contribution) before I jump into my white pajamas and pretend to kick copies of The Swerve around my living room. A message from all InterSwervists, perhaps: 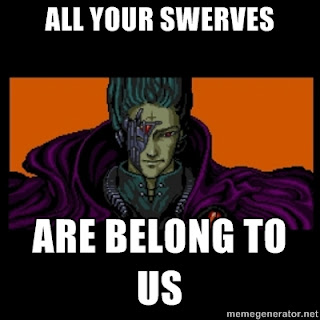 *All due credit goes to Jeffrey Jerome Cohen for coining the term!